The Spanish veteran Feliciano Lopez has been on the Tour for more than 20 years, making an ATP debut in Barcelona 1998 and competing in more than 900 matches and almost 440 tournaments! The 37-year-old has been struggling to find the form in 2018 and 2019, scoring only 24 victories ahead of Queen's and dropping out from the top-100 for the first time since July 2002, thinking about calling it a career as he has already become the Madrid Masters tournament director.

Champion at Queen's from two years ago, Feliciano asked for a wild card in what could have been his last appearance at this event without a historical twist in the tale that propelled Lopez into the record books instead of the retirement.

Namely, the Spaniard has won both the singles and doubles title, achieving an incredible feat at his age and returning into the top-60 of both lists on Monday to extend his longevity and prove the timeless class that has been driving him for two decades.

Lopez had five days to grab eight triumphs and both titles, with five of those coming on Saturday and Sunday in what was the ultimate challenge for the veteran who has been struggling with form in 2019. After a rain delay on Tuesday, Lopez kicked off the campaign on Wednesday, beating Marton Fucsovics 6-7, 6-3, 6-4 and receiving a walkover from Juan Martin del Potro, skipping the second round clash to save the energy for the packed schedule in the upcoming day.

On Thursday, Feliciano had an easy day at the office, opening the doubles campaign with the crowd favorite Andy Murray (the first tournament since hip surgery and the Australian Open), ousting the top seeds Juan Sebastian Cabal and Robert Farah 7-6, 6-3.

On Friday, the Spaniard ousted Milos Raonic in the quarter-final of singles 4-6, 6-4, 7-6 in two hours and 16 minutes, with the doubles clash against Daniel Evans and Ken Skupski halted by dark and rescheduled for Saturday.

In another challenging day, Lopez ousted Felix Auger-Aliassime 6-7, 6-3, 6-4 in the singles semi-final, returning to the court with Andy to defeat the British pair 6-4, 7-6 and prepare for the semi-final against the 3rd seeds Henri Kontinen and John Peers after a short rest.

Lopez and Murray prevailed 7-5, 6-7, 10-7 to advance into the final and things had become serious for the Spaniard, with both singles and doubles finals scheduled for Sunday. After two hours and 49 minutes of titanic battle, Feliciano defeated Gilles Simon 6-2, 6-7, 7-6 for the first singles title in two years, having to prolong the celebration and find every last drop of energy in the tank for the doubles final against Rajeev Ram and Joe Salisbury.

Inspired by the occasion and personal quests, Feliciano Lopez and Andy Murray celebrated a 7-6, 5-7, 10-5 win to lift the trophy that meant so much to both players, with the Spaniard becoming the first players with Queen's double since Mark Philippoussis in 1997!

Also, Lopez is the first singles champion with a wild card since Pete Sampras in 1999, completing a perfect week as only the third player with singles & doubles crown at the same ATP event since 2015, joining the youngsters Alexander Zverev and Matteo Berrettini.

Lopez is the first winner of singles & doubles ATP 500 event since his doubles partner Andy Murray in Tokyo 2011 and this is the 29th singles & doubles "steal" since 2000 and only the seventh in the last nine seasons.

Between Newport 2014 (Lleyton Hewitt) and Montpellier 2017 (Alexander Zverev), no one was capable of winning both titles at a single event and Lopez is the first to join the list since Matteo Berrettini in Gstaad last year.

Of course, Feliciano is also one of the oldest players with singles & doubles feat in the Open era, becoming only the seventh player with an ATP title in singles after turning 37. 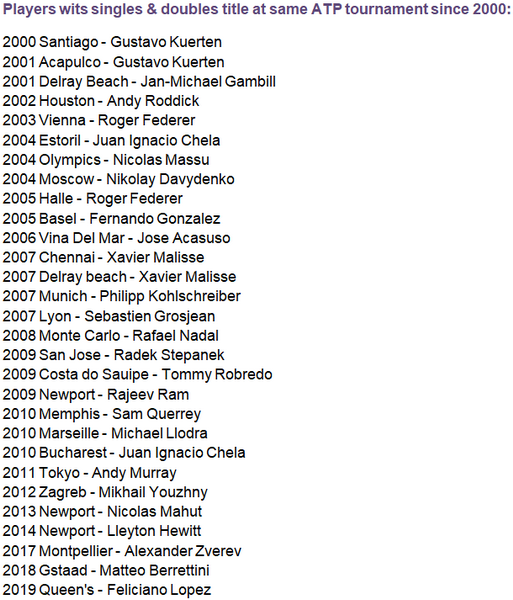