Rafael Nadal has successfully defended the Canadian Masters 1000 event in Montreal, taking home the 35th trophy at this level and 1000 points that put him at the top of the ATP Race to London. The Spaniard became the first player to qualify for the ATP Finals when he reached the semi-final at Wimbledon, securing the place at the premium ATP event for the 15th straight year!

A few days later, Wimbledon champion Novak Djokovic had joined him in London and the next player who should secure the London berth in Roger Federer who stands third in the ATP Race, with a significant gap behind Nadal and Djokovic.

Novak took the lead in the ATP Race after those 2000 points at Wimbledon and Nadal is back in front now, adding 1000 points to his tally in Montreal to stand on 7225, leaving Novak on 6725. That could all change again next Monday, with Nadal skipping this week's Masters 1000 event in Cincinnati where Djokovic is the top favorite together with Roger Federer, returning to action after they both skipped Montreal.

The Swiss is almost 1700 points behind Djokovic although his spot in London should never get in trouble, gathering 1225 points lead ahead of Dominic Thiem who lost in the quarter-final in Montreal. Stefanos Tsitsipas lost in the first match after being the finalist a year ago, keeping the fifth spot in the Race but falling 700 points behind the Austrian.

Tsitsipas is safe at the moment, opening a 535 points advantage over Montreal finalist Daniil Medvedev who is looking better and better in the battle for London after two great weeks behind him. The Russian is almost 500 points ahead of Roberto Bautista Agut who has moved in front of Kei Nishikori with the quarter-final run in Canada, barely missing the semi-final spot and more points on his tally.

Kei Nishikori lost two places and he is now 8th, occupying that last position that leads to the ATP Finals at the moment. With 2080 points by his name, Kei is slightly in front of Fabio Fognini (1955) and Alexander Zverev (1930) who is still in contention for the third straight appearance in London despite a mediocre campaign so far in 2019, at least for his standards.

Gael Monfils gained five positions after reaching the semi-final in Montreal and will need more useful results to get in contention, so as Felix Auger-Aliassime, Guido Pella, Matteo Berrettini, John Isner, Diego Schwartzman and Karen Khachanov who is back in the game after the semi-final run. 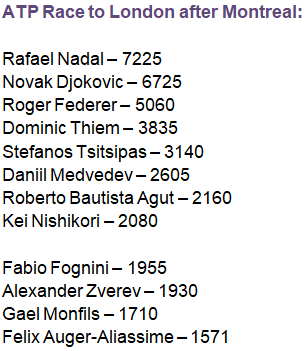