Ten out of 13 biggest tournaments that lead towards the ATP Finals in London are behind us, with 4000 points at the US Open, Shanghai and Paris left up for grabs. The Masters 1000 event in Cincinnati brought the sixth different champion at that series in the first seven events, the biggest number since 2003, with Daniil Medvedev claiming the first Masters 1000 trophy after beating David Goffin in the final.

The Russian has been the most successful player on the North American hard-court swing this summer, taking almost 2000 points after playing in the final in Washington and Montreal as well. Rafael Nadal is still the leader of the pack ahead of the last Major of the season despite missing Cincinnati, standing 140 points ahead of Novak Djokovic who lost to Medvedev in the semi-final, failing to defend the title he won a year ago.

Rafa and Novak are far in front of the rest of the field, with Roger Federer keeping the third place with 5150 points, securing the place in London for the record-breaking 17th time despite an early loss to Andrey Rublev.

Dealing with a cold, Dominic Thiem suffered a terrible loss to Medvedev in Montreal and was forced to withdraw from Cincinnati, keeping the fourth position on the list ahead of an in-form Medvedev who moved ahead of Stefanos Tsitsipas to become the favorite to reach the first ATP Finals in a career.

After 44 victories in 2019 and six finals played, Medvedev is almost 500 points clear in front of the Greek who is still safe in the battle for London, with a significant lead over the newly-promoted top-10 player Roberto Bautista Agut and Kei Nishikori who missed a chance to add big points to his tally in Montreal and Cincinnati.

Fabio Fognini, Alexander Zverev and David Goffin are the best-ranked players outside those eight spots that lead to London, hoping for a deep run at the US Open and to challenge the rivals in front of them, especially if Bautista Agut and Nishikori fail to make an impression in New York. 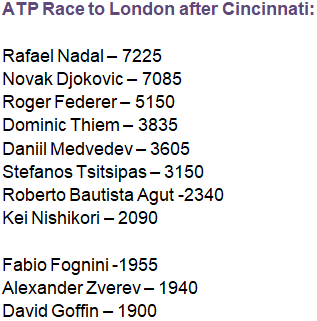