John Isner has been ranked in the top-30 for the last eight years, delivering one consistent season after another and using his favorite tournaments to accumulate points and become world no. 8 after Wimbledon 2018. The American has won 13 out of 15 ATP titles on the home soil (the other two came in Auckland), playing at his best in front of the partisan crowd and standing as one of the players to beat during the North American post-Wimbledon swing, on both grass and hard.

Eleven of John's 15 trophies on the Tour had come between Wimbledon and the US Open, conquering four Newport crowns and even more impressive five in Atlanta, joined by two in Winston-Salem as well. Interestingly, John never managed to win Washington despite playing three finals there (the first one in 2007 in one of his first ATP tournaments in a career), standing a win away from Cincinnati crown six years ago before losing to Rafael Nadal in two tie breaks.

Struggling with a foot injury between March and June, John has not enjoyed the current season that much, bowing out from the top-10 and playing on a high level at only a couple of tournaments. The 34-year-old lost in the semi-final in New York (squandered six match points against Reilly Opelka), Delray Beach and Acapulco in the early stages of the year before reaching the final in Miami as the defending champion, suffering a heavy loss to Roger Federer due to a left foot injury that sidelined him from the court until Wimbledon.

Mikhail Kukushkin toppled the American in the second round at the All England Club, deciding to take a wild card in Newport where he conquered the fourth Hall of Fame Open trophy for the first title in a year, hoping for more of the same during his favorite North American hard-court swing.

Unlike in the previous ten years, John couldn't deliver his best tennis in front of the home fans, scoring three victories at four events for by far the worst campaign since he left college and became the professional player!

Isner didn't play well in Newport but it was enough to win the title against the lower-ranked opponents, taking a few days off and embracing his tenth Atlanta campaign where he played in eight finals! Never losing before the semi-final stage, John suffered the second-round loss to Reilly Opelka who prevailed 7-6, 6-7, 7-6 in two hours and 33 minutes.

It was the fourth clash between the giant servers and the third straight victory for the youngster who prevailed at the Australian Open and New York this year as well in the rivalry that has seen 11 tie breaks in 13 sets played, also ten in a row!

Both players had more than 30 aces and they lost only 14 points behind the first serve, facing just five break chances and saving them all to staying neck and neck all the time. As was expected, they found the range on serve right from the beginning, with no deuces in the opening set before Reilly claimed the tie break 7-2 with two mini-breaks.

John fended off two break points at the beginning of the second set and this time he had the edge in the tie break, taking it 7-5 to extend the match and bring more drama and excitement. The defending champion had a colossal chance to emerge at the top after creating three opportunities on the return at 5-5 in the final set, with Opelka repelling them all to gain a boost before a tie break that went to his side 7-5, sending the five-time champion packing and advance into the quarters.

John had lost in the first round in Washington in 2018 and didn't enjoy much better run this time around, beating Hubert Hurkacz before suffering a 7-6, 6-3 loss to Benoit Paire in an hour and 21 minutes. Benoit saved the only break point he faced and controlled the pace in his games nicely to mount the pressure on John who wasted a 40-0 lead in the fourth game of the second set to find himself 3-1 down, wasting a break chance in the next game and allowing Paire to move through with four winners in game nine.

The Masters 1000 event in Montreal saw no sign of improvements in the American's game prevailing against Jordan Thompson in the deciding tie break before a tough second-round loss to Masters 1000 debutant Cristian Garin.

The Chilean grabbed a 6-3, 6-4 triumph in an hour and 19 minutes, fending off all five break points to keep the pressure on the American who couldn't endure it, getting broken once in each set for another early exit after Atlanta and Washington.

The result could have been different had John converted any of those five break points in games one and three, wasting the opportunity to gain the momentum and falling 4-2 behind when his forehand landed long. Serving for the set, Garin held at love in game nine for a 6-3 in 35 minutes, staying on the same level with the American until 4-4 in set number two before breaking him for a pivotal advantage.

The youngster sealed the deal with a backhand winner in game ten, delivering an early exit for John who was hoping for a better run a week later in Cincinnati, being a former finalist in Ohio. Instead of that, he suffered again like in the previous weeks, barely escaping a defeat against Dusan Lajovic with a late break in the decider and not passing the next obstacle, losing 6-4, 6-7, 7-6 to Pablo Carreno Busta after more than two and a half hours.

The Spaniard barely lost a point on serve in the first set and claimed it with a single break, wasting two set points at 5-4 in set number two before taking it in the tie break to set up a decider where he was the favorite now after finding the rhythm in his games.

Carreno Busta saved all three break points he faced to reach a tie break where he saved a match point at 5-6, moving over the top three points later when John sent a forehand long. With no form or momentum, the American will try to improve this terrible streak at the site where it matters the most, seeking another deep run at the US Open after the quarter-final he reached in 2018. 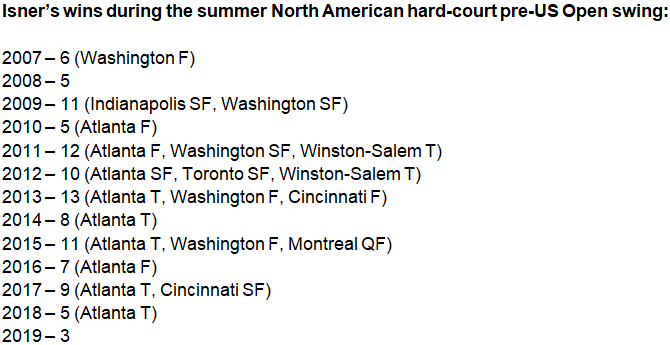