The 33-year-old Frenchman Richard Gasquet has been playing on a high level again after undergoing groin surgery in January, skipping all the action until Madrid and suffering the worst collapse in the ranking since 2010. After a slow start on clay, Richard reached the semi-final in s-Hertogenbosch and advanced into the last four in Cincinnati as well for the best result at the Masters 1000 series since Miami 2013.

With these points, the experienced Frenchman is back inside the top-40, hoping for more good results in the rest of the season after the first-round loss at the US Open. Despite losing to Matteo Berrettini, Richard is celebrating a huge ranking milestone this week, becoming the fourth active player with 750 consecutive weeks in the top-100 after Roger Federer, Rafael Nadal and Fernando Verdasco.

Skipping the first half of the season, Gasquet had to bow out from the top-50 after more than nine years but he is back where he belongs after that performance in Cincinnati, joining the mentioned players on the exclusive list and looking eager to spend a couple of more years in the top-100 and chase 800 or 900 consecutive weeks there.

Richard cracked the top-100 in April 2005 at the age of 18, working on various elements of his game in the years to come to settle himself among the most consistent competitors on the Tour, scoring almost 550 ATP wins and claiming 15 ATP titles from 31 finals.

A talented but injury-prone player could have achieved more, especially after nearly 250 victories on the Masters 1000 and Grand Slam levels combined, battling against 133 rivals from the top-10 and delivering only 33 victories, unable to make an extra step and challenge the opponents from the top of the game.

Nonetheless, he has been able to rattle off one decent season after another for 15 years, good enough to earn the ranking record that illustrates his form and skills. 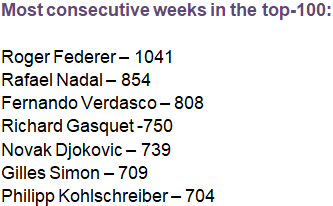