The 19-time Grand Slam champion Rafael Nadal is the top favorite to finish the season as the year-end no. 1 for the fifth time after conquering the US Open. The 33-year-old Spaniard has extended the gap to Novak Djokovic to almost 2000 points after lifting the fourth trophy in New York, with Djokovic retiring in the fourth round after struggling with a left shoulder injury and losing the gap to the biggest rival.

Rafa is the only player with four ATP titles in 2019, lifting two Majors and two Masters 1000 events to gather 9225 points, leaving Novak on 7265 ahead of the last couple of weeks of the regular season and the ATP Finals in London.

Nadal and Djokovic will not play many tournaments in the rest of the year and it should be interesting to follow the battle for the year-end no. 1 position, with Novak as the favorite in Shanghai, Paris and London, winning those events multiple times and due to the fact Nadal won only four ATP titles after the US Open in a career.

On the other hand, the Spaniard has been rock solid so far in 2019, needing one or two good results to finish the season as the best player ahead of the Serb who stole the honor from him last year, with Nadal missing all the action after the US Open due to a knee injury.

Roger Federer is on 5510 points so far in 2019 after the quarter-final run in New York, punching London ticket and hoping for more good results in the rest of the season. Roger's first follower is Daniil Medvedev, the newly-promoted top-4 player who claimed massive 3100 points in the last four tournaments after Wimbledon, losing to Nadal in the final of the US Open after an incredible battle and joining Nadal, Djokovic and Federer at the ATP Finals.

Daniil is 1000 points ahead of Dominic Thiem in the ATP Race after the first-round exit for the Austrian who is another 700 points clear of Stefanos Tsitsipas, who also failed to make an impression in New York. Those six players look safe to play in London at the moment and it is a wild chase behind Tsitsipas, with 1000 points separating the next 16 competitors, starting from Roberto Bautista Agut who is currently seventh despite an early exit at the US Open.

Kei Nishikori, the US Open semi-finalist Matteo Berrettini, Alexander Zverev, David Goffin, Gael Monfils, Fabio Fognini and Diego Schwartzman are all in contention for the remaining spots in London at the moment, separated by 330 points which guarantee an incredible battle until the very last round at Paris Masters. 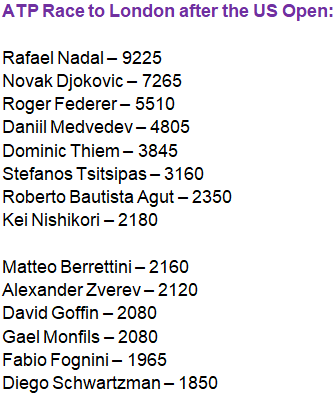