Marin Cilic has been struggling to find form and results in 2019, dealing with injuries and standing on the worst ranking position since February 2014! Back in August, Marin dropped out from the top-20 for the first time in five years, winning only 19 matches so far in 2019 and never reaching another ATP final after that thrilling triumph over Djokovic at Queen's in June last year.

Despite that, Marin is celebrating a massive ranking record this week, becoming the 14th active player with 600 weeks in the top-50 and joining Roger Federer, Rafael Nadal, Fernando Verdasco, Feliciano Lopez, Tomas Berdych, Richard Gasquet, Novak Djokovic and others.

The Croat needed only a couple of seasons to make a significant jump through the rankings and find himself in the elite group, entering there after a strong start of 2008 that saw him reaching the semi-final in Chennai and the fourth round at the Australian Open, still at the age of 19.

After a poor streak in the following months, Marin had to drop out from the top-50 for a couple of weeks, bouncing back in Nottingham and Wimbledon on grass and staying in the top-50 ever since for the fourth-longest active streak of consecutive weeks in that group behind Roger Federer, Rafael Nadal and Novak Djokovic.

For more than 11 years, Cilic has been among the most consistent players on the Tour, finishing the year in the top-10 for the last three years and missing the top-25 year-end ranking only once since 2008. Marin is currently ranked 30th, playing only six tournaments in the first four months of the season and failing to reach the quarter-final at any of them, earning just four wins before Madrid where he gave Novak Djokovic a walkover in the quarter-final.

The results were not there in the rest of the clay season or on grass, with Nadal beating him in the fourth round at the US Open in Marin's last tournament before Tokyo where he has advanced into the second round, seeking the 20th win of the season against Hyeon Chung on Thursday. 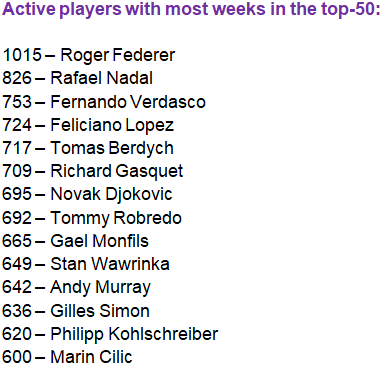