Back in February, an 18-year-old Italian Jannik Sinner was still ranked outside the top-500 before making tremendous progress so far in 2019, winning two Challenger titles and embracing first ATP wins, including one at home Masters 1000 event in Rome.

Ranked 119th, Jannik earned a wild card in Antwerp to enter his eighth ATP event in a career, scoring three victories to become the first player born in 2001 to reach an ATP semi-final. In the quarters, Jannik took down Frances Tiafoe 6-4, 3-6, 6-3 in an hour and 41 minutes to remain on the title course and move closer to cementing the place in the top-100.

The Italian claimed five points more than his opponent, getting broken only once and delivering two breaks from five opportunities to seal the deal in three sets and earn another chance to face the three-time Grand Slam champion Stan Wawrinka, just like at the US Open.

Making one good hold after another, a teenager kept everything under control in the first set, converting the third break chance at 3-3 and sealing the set with an ace in the tenth game after 34 minutes. Tiafoe took charge in the second set, keeping the points on his racquet and properly defending service games to mount the pressure on his younger rival.

Sinner sprayed a forehand error in the sixth game to lose serve and the American grabbed the set with a service winner in game nine to prolong the encounter and his chances. Starting all over, Jannik barely lost a point in the opening four service games in the final set, forcing an error from Tiafoe at 3-2 to deliver a crucial break.

Serving for the win at 5-3, the Italian fended off a couple of break chances with service winners, moving over the top two points later to advance into the last four and make his Antwerp run an even better one. Thus, Jannik has joined an impressive list of players who have reached the first ATP semi-final for their generation, entering the list with the names like Lleyton Hewitt, Tomas Berdych, Rafael Nadal, Andy Murray, Marin Cilic, Kei Nishikori, Grigor Dimitrov, Borna Coric, Alexander Zverev, Denis Shapovalov and Felix Auger-Aliassime. 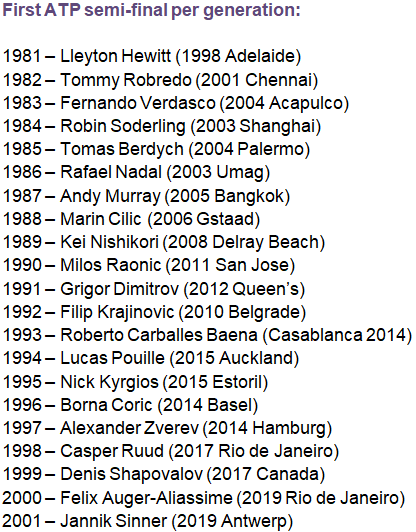