The ATP Race to London has reached its final stage in London, with six players who had already qualified for the ATP Finals and others who are fighting for the remaining two spots. Alexander Zverev grabbed the first of those on Wednesday and Matteo Berrettini is the biggest candidate to clinch the last invitation and complete the London line-up.

At the top of the list, Rafael Nadal and Novak Djokovic are battling for the year-end no. 1 spot in Paris and London while Roger Federer managed to pass Daniil Medvedev and return to the third position after lifting the tenth crown in Basel.

The Swiss went all the way in front of the home fans to secure the 103rd ATP crown and add 500 points to his tally, enough to pass an in-form Russian (six straight finals before an early exit in Paris) and get back where he stood pretty much the entire season.

Roger has won 51 out of 59 matches on the Tour in 2019, an impressive score for the 38-year-old who is among five players with at least four ATP titles this year, followed by Dominic Thiem, Rafael Nadal, Novak Djokovic and Daniil Medvedev.

Despite his age, Roger has enjoyed another very positive year against the much younger opponents, claiming the Masters 1000 crown in Miami and advancing into the semi-final at Roland Garros and the final at Wimbledon, wasting match points against Novak Djokovic that could have made his season even better.

After the quarter-final loss in New York and Shanghai, Roger was back at his best in front of the home fans in Basel, toppling Peter Gojowczyk, Radu Albot, Stefanos Tsitsipas and Alex de Minaur to achieve the milestone crown and move in front of the Russian ahead of their duel for the third place on the list in London. 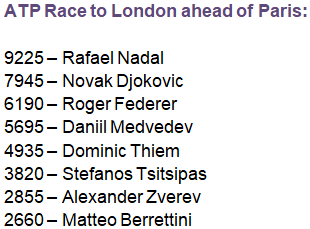