In the previous four seasons, Dominic Thiem had won 11 ATP titles overall before shifting up to a higher gear in 2019, standing at the top of the list five ATP titles by his name. Dominic has left Rafael Nadal, Novak Djokovic, Roger Federer and Daniil Medvedev behind him, lifting the first Masters 1000 crown at Indian Wells and adding four more trophies to his tally for the career-best year at the age of 26.

After Indian Wells, Thiem conquered Barcelona with a dominant performance in five matches, losing 12 games in total against Rafael Nadal and Daniil Medvedev to go all the way before losing in the semi-final in Madrid and the final at Roland Garros.

After an early exit at Wimbledon, Dominic celebrated at home in Kitzbuhel, returning to his best in October with a notable run in Beijing that saw him beating Andy Murray, Karen Khachanov and Stefanos Tsitsipas for the fourth title of the season, matching those from 2016.

The fifth and so far the last crown of the season for Dominic came at home in Vienna, toppling Diego Schwartzman 3-6, 6-4, 6-3 in grueling two hours and 25 minutes to leave the biggest rivals on four titles. It was the fifth win for Dominic over Diego in seven encounters, hitting 33 winners and 36 unforced errors while the Argentine produced 27 winners and 31 unforced errors in a clash of the highest order that kept the crowd entertained from the very first point.

Thiem claimed four breaks from eight opportunities created and gave serve away three times, dominating in the decider with a dominant display on serve and two breaks on his tally that secured the second consecutive ATP 500 title on hard court for him.

They traded breaks in the opening two games and it was the Argentine who delivered the better package in the rest of the set, securing a break in the fifth game with an incredible forehand and stealing the rival's serve at love in game nine with a forehand winner for a 6-3.

Thiem raised his level in set number two, dropping eight points in his games and taking 12 of the last 16 points from a 4-3 down to stay in the title chase. He broke Schwartzman in the ninth game and sealed the set with a service winner in the next game for a 6-4, gathering the momentum ahead of the decider.

There, the Austrian was even more efficient in his games, giving away only six points and pushing the Argentine to repeat those numbers if he wanted to stay competitive, which didn't happen. Diego suffered a break in the first game after a loose forehand, unable to do much on the return as Dominic rattled off one good hold after another before stealing the rival's serve for the second time at 5-3 with a forehand winner that carried him over the finish line. 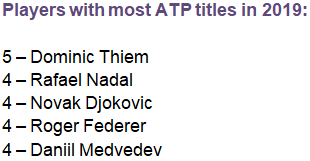