Rafael Nadal and Novak Djokovic have been the players of the season, conquering all four Majors and standing above all the opponents, including Roger Federer and Daniil Medvedev. After winning the US Open, Nadal built a solid lead over Djokovic in the ATP Race but the Serb was the better player in the last couple of tournaments, winning 1500 points in Tokyo and Paris to stay in touch with the Spaniard and set the ultimate year-end no.

1 battle for the ATP Finals next week. In Paris, Novak conquered the 34th Masters 1000 crown while Rafa withdrew before the semi-final clash with Denis Shapovalov, unable to earn more points and allowing Djokovic to move only 640 points behind him.

Nadal became the no. 1 player again on Monday after Djokovic lost the points from the last year's ATP Finals but that could all change in London at the final ATP event of the season. Roger Federer decided to skip Paris to get more rest ahead of the ATP Finals, standing almost 500 points ahead of Daniil Medvedev who couldn't reach the seventh straight ATP final, suffering the second-round loss to Jeremy Chardy in Paris and missing the opportunity to move closer to Federer ahead of his ATP Finals debut.

Dominic Thiem failed to make an impression in Paris after winning the title in Vienna in the previous week, standing 1000 points ahead of Stefanos Tsitsipas who is safe in the sixth place at the moment ahead of the first ATP Finals campaign following the quarter-final run in Paris.

Thanks to poor results of his main rivals, Alexander Zverev has secured the third ATP Finals berth but he is far behind Tsitsipas ahead of London where he has to defend the title if he wants to improve his ranking position.

Matteo Berrettini had to cheer for Denis Shapovalov against Gael Monfils in Paris like never before, with the young Canadian defeating the Frenchman to spoil his ATP Finals dreams and propel the Italian into the last eight, ready to make a debut in London together with Medvedev and Tsitsipas.

In the lower positions, Paris finalist Denis Shapovalov and the semi-finalist Grigor Dimitrov (they both lost to Novak) both gained nine spots to finish in the top-15 and top-20, respectively, with Dimitrov pushing Felix Auger-Aliassime out from the top-20. 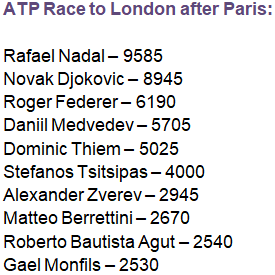