For the fifth straight year, Ivo Karlovic is the oldest player on the year-end top-100 list, securing his 17th consecutive finish in the elite group. The 40-year-old Croat is among a couple of remaining active players born in the 70s and the most prominent one, reaching the final of the ATP 250 event in Pune at the beginning of the season and entering the last 16 at Indian Wells.

The other results were not that good as the veteran lost many close encounters, still capable of keeping his serve safe but failing to bring the clutch when it mattered the most, closing the season with 11 ATP wins and 15 defeats.

Entering the final event of the season at Houston Challenger ranked 106th, Ivo beat four rivals to crack the top-100 again in the very last moment, beating Christopher O'Connell in three sets en route to the final and earning enough points to find himself in the elite group.

In the title match, Ivo wasted no less than six match points against Marcos Giron who prevailed 7-5, 6-7, 7-6 after an epic battle to leave the Croat without the title. Nonetheless, Ivo has achieved his goal, securing the Australian Open main draw berth, ready to compete on the biggest tennis stage after 23 professional seasons in his CV.

With these results, Karlovic has become only the third 40-year-old player in the year-end top-100 after legendary Ken Rosewall and Jimmy Connors, also the first to achieve that since 1992! Known as one of the most accomplished veterans in the history of our game, Rosewall was still among the best competitors after turning 40, spending five consecutive years in the top-100 at that age until 1978 when he was 44 years and one month old!

Fourteen years later, Jimmy Connors repeated the feat after scoring 17 ATP wins, reaching the semi-final in Memphis and the quarters in Atlanta, Indianapolis and Los Angeles before reducing the schedule from 1993. Ivo Karlovic should be ready to kick off the 2020 season and it will be interesting to see is it going to be his farewell year if he fails to keep the place among the world's best 100 players. 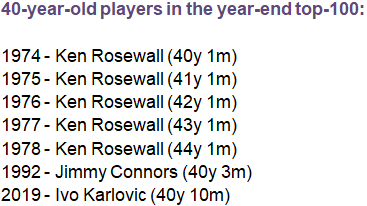