The ASB Classic is the biggest men’s professional sporting event in New Zealand, being held in Auckland since 1956. It became a part of the Open era in 1971 and has been a regular stop on the Tour since 1974 when Bjorn Borg claimed his first ATP title there.

Miloslav Mecir, Thomas Enqvist, Marcelo Rios, Gustavo Kuerten, Fernando Gonzalez, David Ferrer, Juan Martin del Potro and John Isner had also won the tournament in the past and it should be interesting whose name will appear on the trophy in 2020.

The organizers have gathered five players from the top-20, with a strong field of players entering the event just before the Australian Open. World no. 5 Daniil Medvedev will compete in Auckland for the first time, leading the draw and seeking a fresh start of the season after four straight losses at the end of 2019.

Fabio Fognini will try to become the first Italian champion in Auckland, heading to New Zealand for the fifth time and hoping for a better result than in the previous four campaigns that had brought him only three wins. Denis Shapovalov returns to the ASB Classic for the third straight year, scoring only one victory so far and eyeing much better result after a strong finish of the season behind us that propelled him into the top-15.

After skipping Auckland in 2019, Karen Khachanov is back in the draw, hoping for a deep run with Medvedev at the ATP Cup and a notable result here as well after not playing that well in 2019, failing to repeat what he achieved in the previous year.

The two-time Auckland champion John Isner should be the fifth seed, entering one of his favorite events for the ninth time and trying to end the three-match losing streak. Benoit Paire, Hubert Hurkacz, Adrian Mannarino, Frances Tiafoe, John Millman and Feliciano Lopez are also in contention, hoping to spoil the party for the favorites and claim the first title of the season. 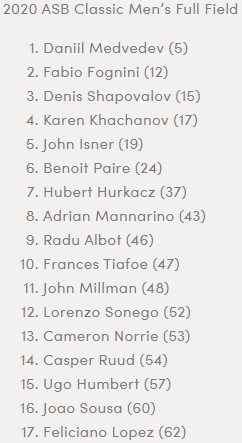