The first Grand Slam of the season starts on Monday in Melbourne, with 256 players battling for singles titles over 14 days. On Monday, five title favorites will hit the court on Rod Laver Arena, starting with the defending champion Naomi Osaka who plays against Marie Bouzkova.

After them, the seven-time winner Serena Williams opens the campaign against the young Russian Anastasia Potapova, seeking the 24th Major and the first in three years. The six-time winner and the biggest star of the event Roger Federer faces Steve Johnson in his first official match of the season, skipping the ATP Cup and hoping to find the form straight away in the quest for the 21st Major crown, the third in four years here in Melbourne.

In the night session, the home favorite and world no. 1 Ashleigh Barty starts the event against Lesia Tsurenko, trying to become the first home champion here since 1978 and continue where she left at Roland Garros last year.

Ashleigh claimed the title in Adelaide on Saturday, gathering momentum ahead of the first Major of the season in front of the home fans. In the last match of the day on the main stadium, the seven-time Australian Open champion Novak Djokovic plays Jan-Lennard Struff, aiming to make the perfect start and remain on the winning course after six singles triumphs at the ATP Cup.

On Margaret Court Arena, Denis Shapovalov and Petra Kvitova play in the first matches before the clash of the day between Venus Williams and the 15-year-old Cori Gauff who already stunned the more experienced American at Wimbledon, looking for more of the same on Melbourne debut. 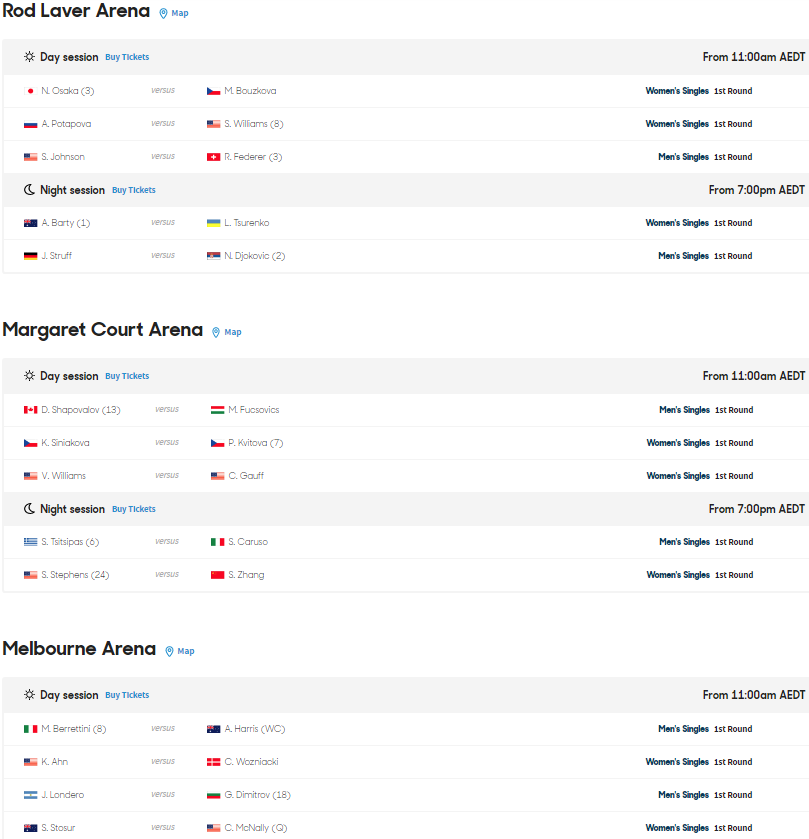