The updated ATP Race to London saw one change in the top-8, with Diego Schwartzman joining the elite that would have played at the ATP Finals if this was the week after the Paris Masters. Winning all 13 matches at the ATP Cup and the Australian Open, Novak Djokovic is miles in front of all the rivals, taking 2665 points so far and hoping to add more in Dubai next week, returning to action for the first time since lifting the eighth Australian Open crown.

The finalist from Melbourne Dominic Thiem is still second, withdrawing from Buenos Aires and seeking the title in Rio de Janeiro this week, standing as the favorite after being the only player from the top-20. The Australian Open semi-finalist Roger Federer stood third on the ATP Race list a week ago, falling to the fifth now after being passed by Gael Monfils and Andrey Rublev.

World no. 9 Gael Monfils has won 13 out of 15 matches so far in 2020, winning back-to-back titles in Montpellier and Rotterdam to earn 965 points following the title defense in the Netherlands. The 33-year-old Frenchman wasted a chance to compete in London last November and will seek another opportunity this season, aiming to crack the top-5 and fight for the notable titles.

The young Russian Andrey Rublev is on a 13-2 score as well, lifting trophies in Doha and Adelaide before losing to Alexander Zverev at the Australian Open and Filip Krajinovic in the quarter-final in Rotterdam, earning enough points to move ahead of Roger Federer and set eyes on the ATP Finals if he maintains this level, already earning half of the points he had at the end of 2019!

The 20-time Major champion Roger Federer stayed on 720 points, hoping to score more next week in Dubai where he claimed the 100th title a year ago and move away from Alexander Zverev who is another Australian Open semi-finalist, sharing that fifth place with Roger after a miserable ATP Cup campaign that could have sent him ahead of the Swiss had he scored any wins.

Rafael Nadal is still safe with 610 points, taking some rest at home in Mallorca before attacking the title in Acapulco and higher positions on the list, eager to qualify for the ATP Finals for the 16th straight year. Diego Schwartzman is the only new player in the top-8, gaining five places despite not being able to compete in the semi-final at home in Buenos Aires following a marathon quarter-final clash with Pablo Cuevas, also withdrawing from this week's Rio de Janeiro.

Stan Wawrinka and David Goffin are not behind the Argentine, with Felix Auger-Aliassime joining this group thanks to the final reached in Rotterdam, gaining 43 spots on the list and looking much better after a mediocre start of the year.

Daniil Medvedev and Roberto Bautista Agut will both have to raise the level if they want to reach London, especially the Russian who claimed two Masters 1000 titles and played in the US Open final last year. 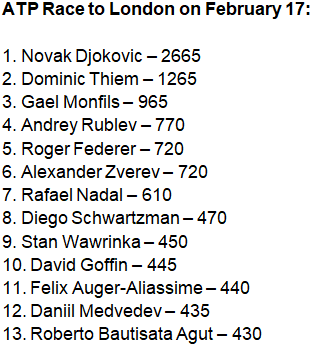