The week behind us saw the first ATP 500 event of the season on clay and two more ATP 250 tournaments, offering a chance for players to make significant gains on the ATP Race to London. Novak Djokovic is still the leading contender to secure the ATP Finals birth first, earning 2665 points at the ATP Cup and the Australian Open to top the list, miles in front of Melbourne finalist Dominic Thiem who failed to add more points to his tally after the quarter-final loss in Rio de Janeiro to Gianluca Mager, ranked outside the top-100.

Dominic is still 390 points ahead of Gael Monfils who is seeking the third straight crown in Dubai this week, hoping to extend his advantage over the players behind him. The 23-year-old Chilean Cristian Garin is the contender for the ATP Finals for the first time in a career, winning Cordoba and Rio de Janeiro in three weeks to grab 750 points to gain 22 positions on the list and become the fourth-best player of the season so far.

Garin is now 25 points ahead of Doha and Adelaide champion Andrey Rublev who will try to regain the position in Dubai where he made a winning start on Monday. Roger Federer is 50 points behind the Russian thanks to his Australian Open semi-final appearance, with no chance to accumulate more points in the next months after undergoing knee surgery that will keep him sidelined until June.

Alexander Zverev seeks the first points outside the Australian Open in Acapulco, together with Rafael Nadal who is 110 points behind him in the last place that leads to London at the moment. Felix Auger-Aliassime is ninth after competing in the final in Rotterdam and Marseille, losing both but gathering 12 wins so far in 2020 and hoping for more of the same in Acapulco and at first Masters 1000 events of the season in Indian Wells and Miami.

Daniil Medvedev didn't enjoy good Marseille campaign, still moving ahead of two rivals and staying in front of the defending ATP Finals champion Stefanos Tsitsipas who defended the title in Marseille in a great style to notch 250 points. 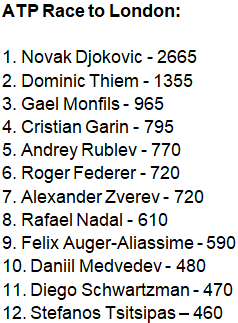 TODAY'S MOST POPULAR
ROGER FEDERER
'Roger Federer will only come back when...', says ATP ace
Grigor Dimitrov explains what went wrong in tough Rafael Nadal loss
'Roger Federer is able to tear himself...', says top analyst
Renée Zellweger, golf comedy "The Back Nine"
'It would be incredible to have Roger Federer and Rafael Nadal', says TD
Dominic Thiem withdraws from Belgrade and won't challenge Novak Djokovic
Rafael Nadal: 'It's really difficult to keep the same intensity without...'
THIS WEEK MOST POPULAR
GOLF
Tiger Woods, revelation about Elin Nordegren
Roger Federer agrees - 'I'm getting more attention since the retirement of..'
Nick Kyrgios withdraws from French Open
Tiger Woods believed that he was in Florida
Rafael Nadal confirms - 'Roger Federer is the best player, but I still remember..'
Dominic Thiem's ​​manager attacks Novak Djokovic and the PTPA
Roger Federer withdraws from Rome. Will he play on clay this year?