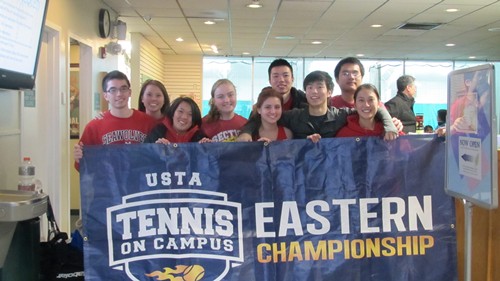 Rutgers University recently won the Tennis on Campus Sectionals, which included stiff competition from college teams across Eastern. Additionally, the University of Rochester was named Eastern’s 2014 Tennis Club of the Year for their volunteer efforts on campus.

Shina Kolisetti, the captain for the Rutgers University squad, was proud of her team’s efforts over the weekend and spoke highly of the event. In fact, this is the first time that Rutgers has won. “The tournament directors' hard work made the event very successful.

There was a lot of great competition and the atmosphere was very enjoyable,” she said. Kolisetti said that enhanced teamwork and a new game plan helped her players thrive on-court and off. “We had great team bonding, competitive players, and the most school spirit I have experienced,” she added.

Her team is proud of the accomplishment. “This is a moment we will never forget,” added Kolisetti. “We look forward to defending our title next year.” But before that, the Rutgers team has more competition ahead.

With the victory, they’ve advanced to the Tennis on Campus National Tournament in Arizona later this year. “We came into Sectionals this year aiming to qualify for Nationals. Winning first place was something we never expected,” she said. “We are going to train hard to represent USTA Eastern.”