On June 15, 2008, Rafael Nadal and Novak Djokovic met in the final of the prestigious Queen's event, the second most important tournament on grass after Wimbledon. A year later, they battled in the Wimbledon semis, with Novak retiring in the third set, and this match at Queen's went down to the wire, with Nadal toppling Djokovic 7-6, 7-5 in two hours and 16 minutes, scoring the ninth win over the Serb in 12 matches and lifting his first ATP title on grass.

As usual since 2005, Nadal was the player to beat on clay that spring, with consistent results on hard as well, getting closer and closer to Roger Federer in the battle for the no. 1 spot. The victory against Novak was Nadal's 37th in the last 40 matches and this served as a real boost for Wimbledon where he finally managed to beat Federer in the final three weeks later.

As the result suggests, it was a close encounter right from the start, with Nadal prevailing in both sets to grab the crown, taking just four points more than Djokovic. Of course, besides the legendary trophy that had been won by some of the biggest names in the world of tennis in the past, they both fought for the first ATP title on the fastest surface, with Novak competing in the first title match on the green surface.

Nadal was eager to leave his two Wimbledon defeats behind him (Roger beat him in the final in 2006 and 2007), overcoming a slow start to bring the match home in straight sets, saving a set point in the first set tie break and winning the last three games from 4-5 down in the second.

Good old days of serve&volley were long gone and this was a dynamic struggle between two of the best baseliners in the world, with 26 rallies longer than eight strokes and only eight volley winners overall. Nonetheless, they went for the shots and we saw almost 50 winners from the court, mostly from the forehand side.

It was interesting to observe Novak's movement as he struggled a lot to find the right balance on the slippery surface, playing many shots from awkward positions and finding himself on the ground a couple of times, luckily without injuries.

The Serb was more determined to impose his shots in the opening few games and Nadal realized he would have to take more risky shots to get back on track and compete on the same level with Novak. Once he did that, an entertaining clash was right on and they stayed neck and neck until the very last point.

The fact that he had beaten Djokovic eight times in the previous 11 matches helped Nadal to have the upper hand in the deciding moments of both sets, although they both could have gone to Novak's side, as we already said.

Officially, they had just seven aces although we are getting a much better picture when we examine the number of service winners, where Djokovic stood on 24 and Nadal on 20. The Spaniard had 25 winners from the court, one more than Novak whose backhand didn't work like he would have hoped, making 24 unforced errors thanks to those problems with his movement that he would improve a lot in the years to come.

Rafa stayed on 15 unforced errors and created a considerable difference there, considering how close the match was. Nadal committed two forced errors more (21 to 19) and we could say that those unforced errors cost Novak the match, as that segment gave the Spaniard the biggest advantage.

More than half of the points ended in the shortest area up to four strokes and Nadal was 51-46 in front, despite hitting four service winners less than Novak. The Serb managed to compensate that shortage in the mid-range rallies where he had a 27-22 lead, with all coming to those longest points where Rafa prevailed 15-11 to create that four points gap when the encounter saw the last point.

Djokovic kicked off the action with a shaky service game, bringing it home after ten points and one break point saved with a service winner, opening a 40-0 lead on the return in the second game, returning well and forcing errors from Nadal with excellent down the line strokes.

Novak wasted the first break point when his forehand landed long and Nadal saved the other two to reach deuce before hitting two forced errors to give the serve away. Djokovic confirmed the break with three winners in game three and had more chances to break Rafa and create an even bigger gap.

The Spaniard struggled to find the rhythm in the opening 25 minutes although he repelled a break point with a forehand winner right after the serve, bringing the game home with the third service winner (that number wasn't impressive since we already saw 22 points in his games).

The fifth game was another extended one and this time it was Nadal who was dangerous on the return, creating four break chances and seizing the fourth when Novak missed a backhand to get back on the positive side of the scoreboard.

Rafa leveled the score at 3-3 with three unreturned serves and could have been happy with that scoreline as Djokovic had the upper hand in the opening games. They both found a nice rhythm in the following games, hitting a lot of winners and reaching 5-5 without any problems.

The final two games were tight, with deuces, and servers bypassed the break points to set up a tie break. Novak was 3-1, 4-3, 5-4 and 6-5 in front, earning that set point after taking a 13-stroke rally. Rafa denied it with a forehand winner after 18 shots, scoring another mini-break with a deep return in the 13th point to move 7-6 ahead.

He grabbed it with a service winner for an 8-6 after a challenging struggle that lasted 74 minutes! Novak was in front in the service winners segment by 16-13 and Nadal had one winner from the field more, hitting 12 against Novak's 11.

Djokovic had 16 unforced errors while Nadal stayed on eight, with five forced mistakes more on the Spaniard's tally (14-9). In the end, it all came down. Pumped after the outcome of the opening set, Nadal landed three winners in the first game of the second set and broke Novak in the second game after three errors from his rival, who had problems with his movement on the slippery surface.

Still, Rafa got broken at 1-1 after a forced error and Djokovic was back on the level terms with three direct points to level the score at 2-2. After good holds on both sides, Nadal had the opportunity to move in front once again, earning two break points in game eight.

Djokovic repelled the first after an 8-stroke rally and the second with a service winner, closing the game with a backhand winner to avoid the setback and send the pressure to the other side of the net. The ninth game started with a forehand winner from the Serb and Nadal added three errors to get broken at love, leaving Djokovic to serve for the set and deliver the deciding set.

One solid hold stood between Novak and the second set but it wasn't to be for him, losing serve on Nadal's third break point for a 5-5 and more drama. Nadal went 40-0 up in the 11th game with three winners before Novak climbed back to deuce, only to lose the next two points that forced him to serve to stay in the match in the next game.

At 30 all, Djokovic sent a volley long and Nadal sealed the deal on his first match point, hitting a smash winner at the net to celebrate the first ATP title on grass and the 28th overall after just turning 22. Novak was 8-7 in front in service winners in set number two and they both had 13 direct points from the field.

The Serb managed to cut the number of unforced errors in comparison to the opening set and nothing could have separated them in that segment, with eight for him and seven for Nadal. Rafa forged the advantage in the forced errors, staying on seven (he had 14 in the first set) and drawing ten from Novak that was just enough to earn a slight edge, pretty much what this match was all about. 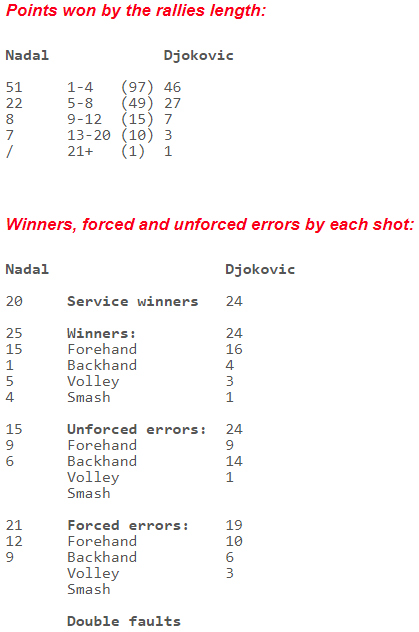