After a small excursion to Queen's in 1999, Roger Federer had decided to make a stop in Halle in 2000, staying there for good and becoming a trademark of this well-organized grass court tournament in Germany, competing there for almost 20 years.

Roger's first title in Halle came in 2003 and has been the player to beat in almost every edition of this big pre-Wimbledon event, reaching final in 12 of the last 13 appearances and lifting nine trophies overall. Between 2003-2017, Roger had failed to reach the final in Halle only in 2016 when Alexander Zverev halted him in the semis, with the Swiss getting a chance for the revenge next year in the title match when he ousted the young German 6-1, 6-3 on June 25.

It was their third meeting, with Roger scoring a win in Rome 2016 before losing here in Halle a month later, returning stronger a year later to deliver a lopsided triumph in only 53 minutes, making it one of the most one-sided finals of the season.

It was all about Federer who played well both on serve and return, outplaying the German from the baseline and at the net to give him just four games in total. Federer dropped just nine points on serve, facing one break point and stealing the thunder from Zverev's initial shot as well, winning 50% of the return points and breaking the youngster four times from eight opportunities he earned.

Roger mixed his game superbly, hitting a lot of service winners, slices and volleys, interrupting rival's rhythm and forcing him to play from awkward positions all the time. Alexander never found a range, making too many errors (especially in the first set) and having difficulties in imposing his shots and driving Federer off from the baseline.

The German started to serve better in the second set but was unable to dictate the points with his first groundstroke and keep the rally away from Federer's racquet. Serving at a high 73%, Zverev couldn't draw much from his first stroke and Roger returned well from both wings to take early control and have the upper hand all the time.

Federer had a 19-14 advantage in service winners and an even bigger 17-7 gap in the winners from the field, dominating with his forehand and volleys to leave the rival far behind. Zverev hit five forehand winners and that was pretty much all we saw from him, unable to tame his groundstroke and making too many easy errors that discouraged him even more.

After ten unforced errors in the opening set, Zverev did manage to reduce the number in the second to end on 13 while Federer stood on nine. Also, Alexander made nine forced errors in comparison to only three from Roger, staying on just four games after 22 errors and 21 winners that stood no chance against 38 winners and 12 mistakes from the Swiss maestro!

Federer delivered a better package of groundstrokes and point-construction, winning 22 out of 28 points that went beyond the fourth stroke, with a 5-0 advantage in the points with nine shots or more and a clear 17-6 lead in the mid-range exchanges between five and eight shots.

Zverev fought stronger in the quickest points up to four strokes where Federer had a 36-27 advantage, not enough for a more positive result and a game or two more on his tally. It was the perfect start for the eight-time champion, breaking at love in the opening game after two winners and two mistakes from Zverev, cementing the break with three winners in game two and securing another break for a 3-0 lead after already six unforced errors from the young gun.

Four service winners pushed Roger 4-0 up after just 13 minutes, moving closer to a bagel after taking the opening two points of the fifth game as well. Zverev finally woke up and won the next four points to get his name on the scoreboard, hitting a groundstroke winner from both wings which was very important for him if he wanted to get back in contention.

Federer was sailing through his service games, though, firing three winners to open up a 5-1 gap and forcing Zverev to serve to stay in the set. That seventh game started with a drop shot winner from Roger and Alexander added three more mistakes to lose serve for the third time and hand the set to the Swiss after only 22 minutes.

Federer had a 9-5 lead in service winners and 5-2 in the winners from the field, committing just four unforced errors in comparison to ten from Zverev. Also, the German had more forced errors (4-2) and he was to deliver something special in set number two if he wanted to change his fortune.

The second set kicked off with three unforced errors from Roger who offered the first and only break point to Zverev, repelling it with three winners to safely bring the game home, gathering even stronger momentum from this.

From 30-15 down in the second game, Zverev hit a volley winner and two more from his serve for hold and 1-1, standing on the positive side of the scoreboard for the first time in the encounter. Roger made another easy hold in game three and Zverev stumbled at the net in the last point, hurting his left ankle but continuing to play without medical help.

Federer had a chance to open a 3-1 lead after a smash winner in game four, denied by three service winners from Alexander who already had more unreturned serves than in the entire first set. The Swiss held at love to move 3-2 up and got the crucial break in the next game, moving 4-2 in front and having the finish line clearly within his reach now, forcing two volley errors from the youngster and securing the game with a 14-shot rally.

Four winners sent Federer 5-2 in front and clinched the victory in the most dominant style, landing three consecutive volley winners in game nine for an absolute triumph and the ninth title in Halle. 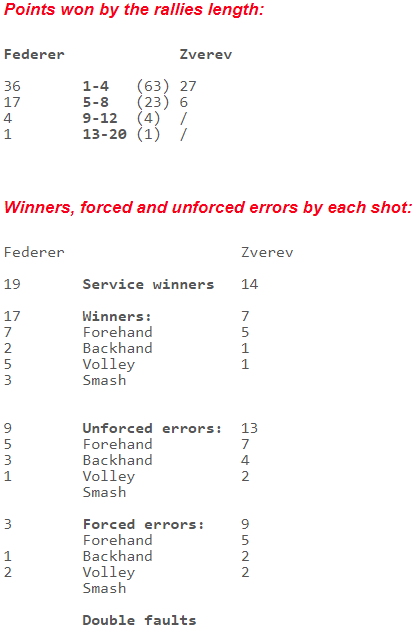 TODAY'S MOST POPULAR
RAFAEL NADAL
Rafael Nadal: 'It would have been difficult to achieve that'
"Roger Federer loves tiramisu and doesn't swear," said ...
WTA Prague: Kristyna Pliskova ousts Petra Martic. Elise Mertens downs Camila Giorgi
'Rafael Nadal is a real charm', says Spanish actress
Simona Halep: "US Open? I will make a choice soon"
Olympic bronze medalist Nike Lorenz on meeting Novak Djokovic:He was the coolest ever
Michael Berrer: Rafael Nadal is rather tense, Roger Federer is relaxed and has fun
THIS WEEK MOST POPULAR
ROGER FEDERER
'Roger Federer is not that important to tennis', says former Australian champion
WTA Lexington: Serena Williams to face sister Venus or Victoria Azarenka in R2
Top coach understands the decisions of Roger Federer and Novak Djokovic
Carlos Alcaraz: I don't want to compare myself to Rafa Nadal because....
'When Federer, Nadal, Djokovic don't play well, they fight and...', says top coach
In Roger Federer's words: 'I turned out to be a bad guy who put Lleyton Hewitt..'
'Have heard Roger Federer and Nadal thank the spectators for...', says top coach