The 1990 season marked the turning point in the history of men's tennis, with the creation of the ATP Tour and the new tournament's structure. The ATP picked nine events for the premium series and Cincinnati was among them, standing as the third-biggest event in the United States after the US Open and Miami, having a reach history that goes back to 1899!

It became a part of the Open era in 1970 and some of the biggest names in tennis lifted the crown there before 1990, including Ken Rosewall, Stan Smith, Jimmy Connors, Ilie Nastase, John McEnroe, Ivan Lendl, Mats Wilander, Stefan Edberg and Boris Becker.

Stefan Edberg had conquered Cincinnati in 1987 and reached four consecutive finals up to 1990, losing to Wilander in 1988 and to Brad Gilbert in 1989. Stefan Edberg and Brad Gilbert were the players to beat in the first edition of the Masters 1000 event in Cincinnati, passing all the obstacles to set the title clash that was completely different from the one from 12 months ago, with Edberg wrecking Gilbert 6-1, 6-1 in 51 minutes for the second Masters 1000 crown after Indian Wells in March.

It was their 12th meeting in the last six seasons and the ninth win for the Swede, in what had been the most one-sided Cincinnati final since 1947! More importantly, Stefan became the world no. 1 after this title, getting the best possible award for the consistent run in the first seven and a half months of the season to overcome Ivan Lendl who held the men's tennis throne for 80 weeks since January 1989.

Edberg had to retire against Lendl in the final of the Australian Open but won titles at Indian Wells and Tokyo, with another big final in Miami as well. As usual, clay was not the fertile ground for him, forgetting it quickly after going all the way at Wimbledon and Los Angeles before Cincinnati, producing another great run in Ohio to write the history books as only the eighth world no.

1 since the start of the ATP ranking in 1973. Stefan didn't put a foot wrong in the final match, overpowering Gilbert in every department to earn a commanding triumph in just over 50 minutes. The Swede won 52 out of 79 points and dropped only 12 points in seven service games, never facing a break point and sending all the pressure to the other side of the net.

The defending champion never found the desired rhythm, ending the encounter with 17 winners and 23 errors, not that bad but certainly not enough to challenge Edberg on a more serious level. Stefan dictated the pace with picture-perfect serve&volley game, staying in the attacking mode all the time and spraying just eight errors overall to leave Brad without any answer or a plan on how to impose his shots.

The Swede had a 12-7 advantage in service winners and 16-10 in the winners from the field, hitting ten alone with his spectacular volley that was on almost every ball, forcing Gilbert to seek lines and that small pieces of the court that stayed uncovered.

Brad had nine unforced errors while Stefan stayed on only five, while the most striking distance came in the forced errors department where the American counted to 14 and drew just three from Edberg. As was expected, the short points up to four strokes were the dominant kind of rallies on fast hard court, with Stefan forging a clear 38-20 advantage in them, finishing the job with his serve, volley or after a swift forced error from Gilbert.

The mid-range exchanges with five to eight shots gave Edberg a 9-6 lead, standing 5-1 up in those rare exchanges that hit the nine-shot mark to complete his victory in style. Stefan grabbed a break of serve in the very first game of the match after three errors from Gilbert who fired two passing winners from both wings in game two before Edberg held to confirm his break and move 2-0 in front.

The Swede was in the right zone and scored another break in game three with a forehand lob winner and another one at the net, staying focused in the fourth game after a double fault to bring it home with three winners, increasing the lead to a 4-0.

Brad finally got his name on the scoreboard with three service winners but still had nothing to show on the return, allowing Edberg to move 5-1 in front with unreturned serves in game six. The set was over when Gilbert sprayed four errors in the next game, having to work a lot harder in set number two if he wanted to accomplish more positive result and at least be competitive.

They had a similar first serve percentage although everything else was on Edberg's side, giving away six points on serve and taking 13 out of 21 points on the return to outplay the defending champion in no time at all.

Gilbert had a slim 4-3 advantage in service winners while Edberg took charge from the field, punching ten winners in comparison to only four from the American. Brad struggled to control his groundstrokes and was 6-2 down in the unforced errors department and 7-2 behind in forced mistakes, a clear sign of which player tamed his strokes in a more efficient way.

Stefan continued where he left in the opening set, holding at the beginning of set number two with four winners, taking time off from Brad's shots and keeping the points on his racquet. Two return winners gave him the advantage in game two, gaining a break after a double fault from Gilbert who couldn't stop his downfall.

Three service winners pushed Edberg 3-0 in front and no one believed the match would last for too long now. Gilbert finally produced better tennis in game four, blasting four winners to reduce the deficit but taking nothing away from the Swede's game, with Stefan adding three winners to his tally in game five to move 4-1 ahead.

The Swede didn't have to do much in the sixth game either, taking advantage of Gilbert's four errors, serving for the crown in the next game. Edberg won three points in a row from 30-15 down to cross the finish line and claim the fifth title of the season, becoming world no.

1 on the following day. It was 9-3 in service winners for Stefan in the second part of the encounter and they were leveled on six winners from the field each, with an improvement for Brad in that segment in comparison to the opening set.

They were on three unforced errors each and Stefan created a handful gap in forced errors area with a 7-1, playing on the same level from start to finish to leave Gilbert far behind. 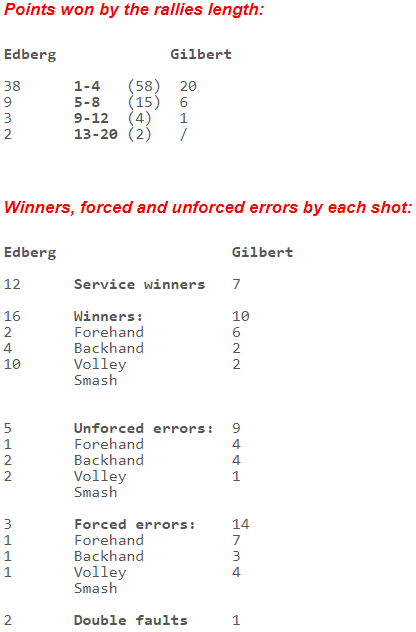