Back in 2003, Roger Federer transformed himself from a super talented youngster into a Grand Slam champion, stepping up on a glory path that has led him towards the status of one of the greatest players of all time. After winning the Australian Open at the beginning of 2004, the Swiss conquered the ATP throne and would play four incredible seasons in a row, capturing 11 Majors between 2004-07 and staying above Rafael Nadal and all the other competitors to write the new chapters of tennis history.

The peak of Roger's domination came in 2006 when he played 97 matches, winning 92 of those and lifting 12 trophies from 17 tournaments he entered! Nadal beat him in the final of Dubai, Monte Carlo, Rome (one of the best matches ever) and Roland Garros, while the only time when he failed to reach the final was in Cincinnati, losing to a British teenager Andy Murray in straight sets.

Roger never played so many matches during the season and Tokyo was in his calendar for the first and last time, competing there in the first week of October. World no. 1 had to dig deep to reach the semis, ousting Viktor Troicki and Takao Suzuki in close encounters, saving his best tennis for the last two tests to grab the ninth crown of the season from the 13th final.

In the semis on October 7, Roger defeated the German Benjamin Becker 6-3, 6-4 in exactly an hour in their first clash on the Tour. Federer advanced into the final with a single break in each set, controlling the scoreboard and holding the strings in his hands from start to finish for another rock-solid victory in a memorable season.

The Swiss was 29 from 29 on the first serve, managing to keep his second serve safe as well and losing just eight points in his service games to fend off the only break chance he faced, keeping the pressure on the other side of the net.

Roger was impressive in set number two, dropping only a single point behind the initial shot and racing towards the finish line in no time at all, saving energy for the final clash against Tim Henman, whom he beat in 67 minutes without facing a break point.

On the other hand, Benjamin had to work hard in his service games to stay competitive, especially in the opening three when Federer forced six deuces and grabbed a break that pushed him in front. In the rest of the encounter, Becker had some solid games but stayed away from any chance on the return, with one loose service game in set number two that cost him the match after making three forehand unforced errors.

Overall, the encounter was dotted with service winners and forced errors and it was Roger who fired more direct points and committed a fewer number of mistakes to emerge as a deserved winner. Becker had to throw his best shots to do some damage on Federer's backhand and it wasn't enough to give him the better result, spraying just too many errors with his forehand, many in the crucial moments.

Also, Roger was moving well, hitting the ball early and opening the court for smooth execution, backed by the perfect display on his first serve and in service games in general, notably in the second set. Twelve aces in total don't give the full picture about how well the players served, as they had 41 service winners in total, 23 for Federer and 18 for Becker.

Also, the Swiss added ten winners from the court while the German stayed on five, a notable difference in Federer's favor before we consider the number of errors they made. Becker couldn't control his forehand and that led him to 14 unforced errors, five more than Roger who tamed his shots nicely to keep both wings under control.

The German did an excellent job in forcing 14 mistakes from his opponent, eight from the backhand wing, only to commit 12 errors as well, staying without the advantage in that segment. Almost nothing could have separated them in the shortest points up to four strokes (35-33 for Roger) and in 13 most extended rallies (8-5 for the Swiss) but the mid-range exchanges from five to eight shots were the area where Federer made the crucial buffer, taking 17 out of 25 to wrap up the triumph and advance into the final.

Roger drew first blood in the second game after a forehand error from Becker, fending off a break point in game five and closing the set with a forced error in game nine for a 6-3. The second set was fast and fluid, with only one exchange longer than eight strokes and no deuces.

Federer grabbed a break in the third game and lost just one point in five service games, sealing the deal with another powerful hold at 5-4 to book the place in the title match. 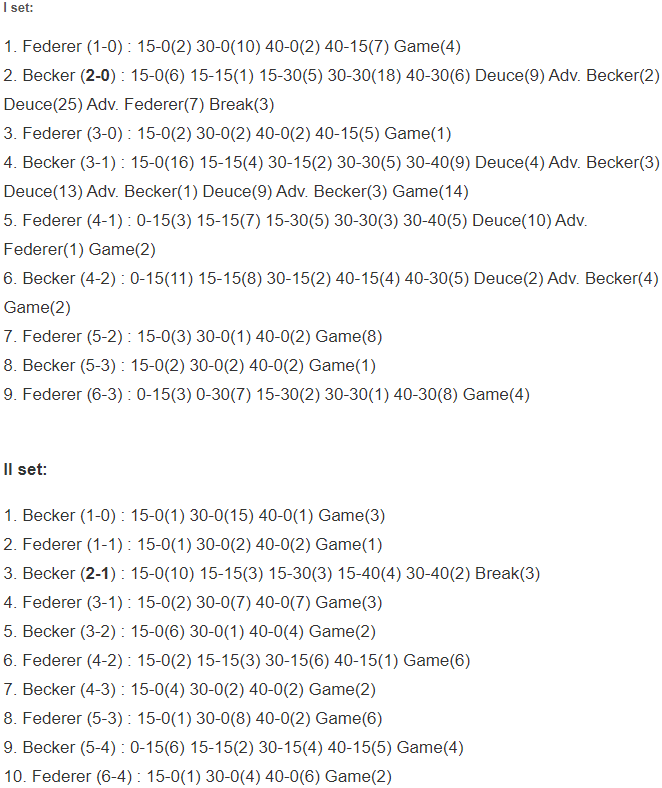 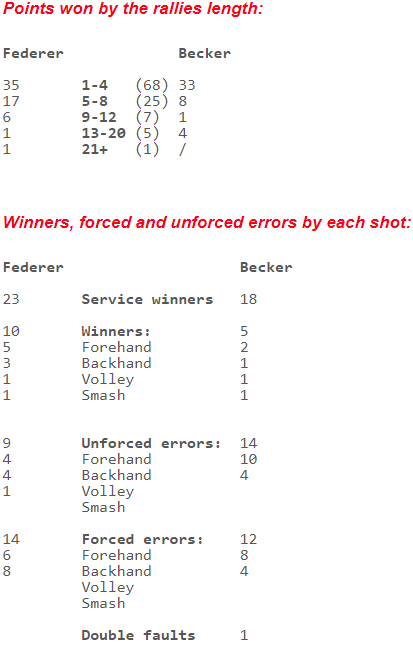 TODAY'S MOST POPULAR
Uncle Toni: 'Rafael Nadal is the only clay specialist player who...'
THIS WEEK MOST POPULAR
Roger Federer's racquet stringer affected by the crisis
Powered by: World(D) 1.6