In 1992, we had another exciting season on the ATP Tour, with the best players in the world winning between three and five ATP titles and sharing the most important tournaments among themselves to set up another thrilling Masters Cup event in Frankfurt.

For the first time since 1980, Ivan Lendl was not in the draw, finishing the season inside the top-8 but deciding to skip the event due to an injury, allowing Richard Krajicek to make a debut together with the other youngsters Michael Chang and Goran Ivanisevic.

As usual, it was a stellar field of rock-solid indoor players, drawn in groups named after two of the greatest Australian players, Rod Laver and Ken Rosewall. The young Croat Goran Ivanisevic had won Stockholm Masters 1000 event on the same surface a few weeks earlier and made the best possible debut in Frankfurt, beating Michael Chang, the last year's finalist Jim Courier and Richard Krajicek in straight sets to top the standings in Rod Laver Group ahead of Courier who prevailed against Krajicek to book the semi-final spot.

In Ken Rosewall Group, the defending champion Pete Sampras grabbed all three wins against Stefan Edberg, Petr Korda and Boris Becker and the German was the one who advanced into the semis together with him after commanding triumphs against Edberg and Korda, reaching the last four for the sixth time in eight appearances at the Masters Cup.

Ivanisevic and Becker set the semi-final clash without being broken in the round-robin stage and we saw just two breaks in their encounter that contained 89 service winners in total, with Becker prevailing 4-6, 6-4, 7-6 for the place in his fifth Masters Cup title match.

Goran drew first blood in the fourth game with a forehand winner to bring the opening set home and Becker responded with a late break in set number two to send the match into a decider in front of the partisan crowd. In the deciding tie break, Goran saved a match point at 5-6 with a forehand down the line winner and another one with a booming second serve at 6-7, only to send an easy volley long and give Boris another match point.

The German sealed the deal with his well-known diving volley at the net, booking the place in the final after two hours and 20 minutes and facing Jim Courier who prevailed in an all-American semi-final against Pete Sampras in two tie breaks.

In the repeat of the last year's final, Jim saved two set points at 4-5 in the opener with service winners and received a warning at 0-3 in the tie break. Out of sudden, he started to play better and won 19 of the next 24 points to take the breaker and open a 3-0 lead in set number two.

Pete pulled the break back in game five after a forehand error from Courier but lost the tie break 7-4 after an hour and 45 minutes to lose the crown and send his compatriot into the second straight Masters Cup title match.

It was the sixth meeting between Becker and Courier in the last three seasons and Boris grabbed the sixth triumph, dominating over Jim during that year after already beating him in an epic Brussels final and the quarter-final in Paris!

After two hours and 24 minutes, Becker scored a 6-4, 6-3, 7-5 victory for the first Masters Cup in four years and the first on the home soil. Also, the match was played on Becker's 25th birthday, receiving the best possible gift he could have got.

The German was the best indoor player of the season, conquering Brussels, Rotterdam, Basel and Paris before going all the way in Frankfurt after another great display against the American. Courier created four break chances and broke Boris just once, far from enough to stay in contention and extend his chances, facing 13 break points and giving serve away five times to hand the victory to his rival.

Boris had 41 service winners and also more winners from the court, taming his shots nicely and mounting the pressure on the other side of the court. Courier didn't make too many unforced errors but Boris forced more than 40 mistakes with his deep and precise groundstrokes that prevailed over Jim on that day.

Becker had the advantage in the shortest points up to four strokes and that pretty much forged the win for him, as there was nothing to separate them in those rallies that passed the four-shot mark. Jim held at love in the opening game of the match with a service winner and Becker did the same with good serves in game two to level the score at 1-1.

The first significant moment of the clash came in the seventh game when Boris claimed four points in a row to earn a break with some great returns and backhand down the line winner that sent him 4-3 up. Becker held at 15 in game eight with another booming serve to confirm the break, clinching the set after hitting four winners in game ten for a 6-4 in 35 minutes.

Courier won more points on the return in the first half of the second set but was yet to create a break chance, with Backer waiting for an opportunity on the return patiently. It came at 3-3 when he landed three winners to break Jim at love, fending off a break point in the next game with a service winner to move 5-3 up.

The German was in his zone now, taking another break in game nine to claim the set 6-3 after rattling off four straight games and moving a set away from the title after just 80 minutes of play. Jim had to change something on the court and rather quickly, getting an advantage of some loose shots from Becker at the beginning of the third set to score his first break of the match thanks to a backhand crosscourt winner.

Nonetheless, Becker pulled the break back in the very next game with a beautiful behind the back volley winner that brought him back to the positive side of the scoreboard, keeping him on the title course. Courier saved a pair of break chances in game four with winners and had to work hard in game eight to remain in contention as well, repelling no less than four break points with some brave hitting that kept him at 4-4.

Serving in game 11, Becker pushed a volley long to give his rival a break chance but his volley found the target in the following point for a deuce, saving another break chance with a good serve for a crucial hold and a 6-5 lead.

Serving to stay in the match, Courier hit a double fault to give two match points to his rival, with Becker seizing the second after a deep return that the American failed to control. Boris started a massive celebration of one of his most favorite titles in front of the packed crowd at the Festhalle Frankfurt, lifting the trophy and blowing out candles on birthday cake for a double ceremony. 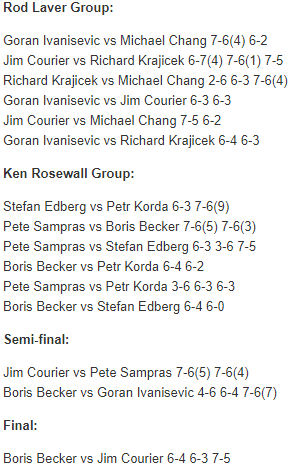