Pete Sampras became the dominant figure on the Tour in 1993, playing on an even higher level a year later as the first player with ten ATP titles in a single season since Ivan Lendl in 1989 and the first since the Czech in 1987 who spent every week at the top of the ATP rankings.

Despite leg injuries that kept him off the court for almost three months, Pete was the player to beat in 1994 after claiming those ten titles from 11 finals, including his first Australian Open and the second Wimbledon. The American lifted the majority of his crowns by Wimbledon, finding his form again in the closing stages of the season to claim the second ATP Finals trophy and extend his dominance over the rest of the field.

After not playing that well in 1993, Andre Agassi and Boris Becker were back where they belong and a player who had a breakthrough run was Alberto Berasategui, entering the top-8 and securing his place at the ATP Finals in Frankfurt (the defending champion Michael Stich couldn't earn the spot in the draw).

There, we had the opportunity to witness one of the strongest groups ever, with indoor giants Boris Becker, Pete Sampras, Stefan Edberg and Goran Ivanisevic battling for the place in the semis from White Group while the baseliners Andre Agassi, Sergi Bruguera, Michael Chang and Alberto Berasategui stood in the Red Group where they all had a chance to advance into the last four.

Boris Becker found the right form at the Masters 1000 event in Stockholm and was ready to make some noise in front of the home crowd in Frankfurt as well, seeking the second title there in three years. Becker prevailed against Goran Ivanisevic, Pete Sampras and Stefan Edberg to finish the round-robin matches at the top, with the last year's finalist Pete Sampras joining him in the semis after a hard-fought win over Edberg.

Interestingly, Becker had the opportunity to eliminate Pete but lost the third set against Stefan even though he needed only a set to secure his place in the semis. As usual for a clay-courter at this event, Alberto Berasategui couldn't match the pace of his rivals, winning just eight games on his Masters Cup debut and leaving the others to decide who will stay in the competition.

Champion from 1990, Andre Agassi had the upper hand with three wins and Sergi Bruguera took the second place to set the semi-final clash against Boris Becker. In a thrilling encounter between Sampras and Agassi, the younger player prevailed 4-6, 7-6(5), 6-3 for his third final at this event, keeping his focus in the closing stages of the second set and never looking back in the decider.

Agassi had his chances against the better indoor player, being just a few points away from a straight-sets victory but it wasn't to be for him on that day, losing the tie break 7-5 and suffering a break at the start of the final set to plague his chances and finish his run in the semis.

Boris Becker lost the opening set against Sergi Bruguera but dominated in the rest of the match to wrap up the victory and book the place in his fifth Masters Cup title match. On November 20, Pete Sampras took down Boris Becker 4-6, 6-3, 7-5, 6-4 in two hours and 38 minutes for his tenth ATP title of the season from 11 finals and his second at this event after 1991.

Unlike 12 months ago, when Michael Stich overpowered him in the final, there was nothing wrong with Sampras' performance in this match, scoring his sixth triumph in 11 matches against the German and the first since Rome when they met in the surprising final.

Pete won almost 20 points more than Boris and had to play against only two break chances, dominating from the court with his deep and precise groundstrokes from both wings, something that Becker failed to repeat. The German had a huge 62-37 advantage in service winners but that was the only element where he outplayed the American, offering Pete 12 break opportunities and getting broken once in each set after the opener to finish runner-up for the third time at this event.

Boris struggled to find the rhythm on the second serve, hitting 12 double faults and not being able to find that extra gear in the deciding moments after a strong start. The crucial moment happened in the sixth game of the second set when Becker hit five double faults to lose serve for the first time, losing focus never looking as dangerous as he was in the first set.

Pete forged the main difference in the mid-range rallies from five to eight shots where he tamed his strokes beautifully to leave Becker far behind, defending well and keeping his backhand safe to keep the pressure on the other side of the net.

It was a rock-solid start of the clash for both players, finding the rhythm in their games and standing at 4-4 after an ace from Becker in game eight, 25 minutes since the initial point! Out of sudden, Sampras couldn't find his first serve in the next game, hitting a double fault and losing serve after a return winner from Becker who got a chance to serve for the opener.

Pete created two break chances in that tenth game with a forehand winner but netted an easy backhand in the following point that could have pushed him back to 5-5, allowing Becker to close the set in 34 minutes with an ace.

From 40-0 up in the second game of the second set, Becker missed an easy volley to give Pete a break point, blasting three service winners to take the danger away and level the score at 1-1. Serving at 2-3, Becker wasted two game points and double faulted five times to get broken after a return winner from Sampras who gained the momentum now, moving 5-2 up with a service winner in game seven.

Facing two set points in the next game, Boris landed four winners to avoid another break and stay in the set before Pete closed this part of the match with four direct points at 5-3 to level the overall score after 70 minutes.

The German recovered his game in set number three, serving well and creating a set point at 5-4 after a great net coverage. Sampras landed an ace down the T line to erase it and level the score at 5-5, gaining confidence before the final games of the set.

Three amazing backhands earned a break for Pete in the 11th game, clinching the set on his serve in the game that followed for a 7-5 and a huge step towards the finish line. Returning at 2-2 in the fourth set, Sampras grabbed a break after a poor volley from Becker at the net, cementing the lead with four service winners in the next game to move 4-2 ahead.

Boris lost the ground in those moments, facing two more break points in game seven before he brought it home with three aces to remain within one break deficit. Pete was marching towards the victory after four winners in the eighth game, delivering three more while serving for the title at 5-4 to celebrate his second Masters Cup title and the 31st overall at the age of 23. 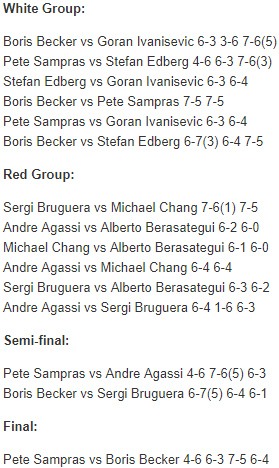