A year after he won the junior singles title, Roger Federer made his Wimbledon debut in 1999, losing the opening round in two first two visits to the All England Club. That all changed in 2001 when the young Swiss dethroned the seven-time champion Pete Sampras, standing as a force to be reckoned with at the most prestigious tennis event in the years to come.

On July 4, 2003, Federer took down another accomplished youngster Andy Roddick 7-6, 6-3, 6-3, advancing into the first Wimbledon final. It was one of the most important matches in a career of both at that point, with Federer competing in the first Grand Slam semi-final and Roddick in the second after Melbourne in January.

Like Roger, the American lost only one set en route to the last four, standing no chance there against a fantastic rival who did everything right to bring the match home in an hour and 43 minutes. Federer was the favorite, presenting pinnacle grass-court tennis that saw him hitting more than 70 winners and just 20 unforced errors, leaving Roddick with no answer.

We have to mention a set point for the American in the tie break of the first set, failing to convert it and never getting another chance against the opponent who pretty much flew over the court. Federer was the more aggressive player, coming to the net more often and hitting more riskier groundstrokes to gain the edge in the rallies and keep them on his racquet.

Attacking tennis usually brings errors as well, and one might have been expecting to see a lot of those on Roger's tally. That wasn't the case in this encounter, though, as he tamed his shots in a manner of a true Wimbledon champion.

Federer had six mistakes more than Andy, standing firm in the winners segment and never looking back after a tight opening set.

Roger did a lot of damage with his sharp and precise serve, hitting 34 service winners.

Also, the Swiss charged forward every time he would land the first serve in, smartly opting to stay behind after the second serve and build the point from the baseline.

Andy had nine volley winners, although it was obvious he didn't feel comfortable there, exposed against Roger's accurate groundstrokes and with no serve & volley combos in his gameplan. Besides that, Federer covered the court like probably no one before him on this surface, with great anticipation and the ability to quickly predict the next move from his opponent.

Roddick's groundstrokes were pretty much off, managing to hit mediocre seven winners and force 15 errors from Roger. In comparison to that, Federer fired 17 forehand winners alone, a clear illustration of his dominance from both the baseline and the net.

Roddick stayed in touch with Federer in the most extended rallies, having to find one or two extra shots to penetrate the rival or draw the mistake out of him, with no chance to endure such a high rhythm in the entire clash.

If we consider the whole package of serve, return, offensive and defensive game, it was one of the most impressive and explosive Wimbledon triumphs for Roger Federer, despite the fact he has had many of those over the years!

As we already said, Federer outplayed Roddick in service winners 34-25 and that could only mean trouble for Andy, who served at 58% and lost 36% of the points behind the initial shot. On the other hand, Roger dropped 17 points in 15 service games and the tie break, experiencing only one awkward moment at the beginning of the second set.

He fended off two lone break points, stealing Andy's serve three times from eight opportunities. Roger made the biggest difference in the winners from the field department, striking 40 against only 20 for Andy, far from enough to keep him in contention or put the Swiss under more pressure, especially on the return.

The Swiss had 17 winners from his forehand and 12 from a volley that worked better and better as the match progressed, reducing Roddick on three direct points from forehand. They had a similar number of unforced errors (20 for Roger and 17 for Andy), with the American making the biggest one on that set point in the first set.

Roger had three forced errors more (15-12), which brings the total number of mistakes to 35-29 for Roger. That becomes irrelevant when we know that he had 74 winners, opposed to only 45 from Andy, the most striking difference that propelled Federer into the title match.

Almost 68% of the points ended with the maximum number of four shots, expected number in the encounters between these two, with a significant 70-54 advantage on Roger's side thanks to service winners and the superior first shot after the initial stroke.

Federer also had the edge in the mid-range rallies, winning 27 out of 46 and leaving Andy with a slim 7-6 advantage in 13 most developed exchanges that was rather trivial for the overall result. 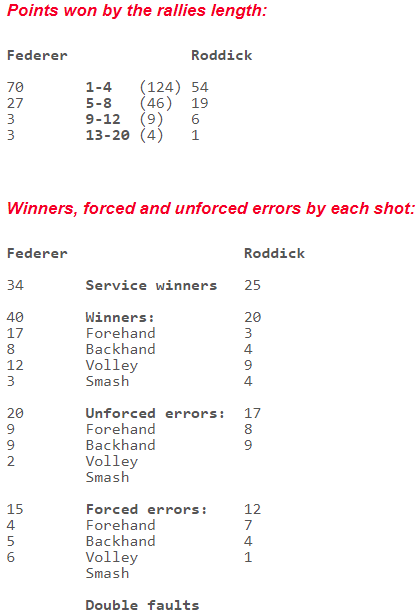 TODAY'S MOST POPULAR
ROGER FEDERER
In Roger Federer's words: 'I turned out to be a bad guy who put Lleyton Hewitt..'
'Rafael Nadal, Roger Federer and Djokovic have stayed because...', says top coach
'Have heard Roger Federer and Nadal thank the spectators for...', says top coach
WTA Lexington: Serena Williams downs Bernarda Pera for winning comeback
'Roger Federer showed us a video in which he dribbles...', says rooftop tennis girl
Top Seed Open: Amanda Anisimova withdraws from Lexington with shoulder injury
In Roger Federer's words: 'It's nice to hear admiring words from John McEnroe'
THIS WEEK MOST POPULAR
ROGER FEDERER
'Roger Federer is not that important to tennis', says former Australian champion
Carlos Alcaraz: I don't want to compare myself to Rafa Nadal because....
Top coach understands the decisions of Roger Federer and Novak Djokovic
WTA Lexington: Serena Williams to face sister Venus or Victoria Azarenka in R2
'When Federer, Nadal, Djokovic don't play well, they fight and...', says top coach
Rafael Nadal: 'I know how difficult it was for my parents...'
Andy Murray moves into US Open main draw after Alex Popyrin's withdrawal