Grigor Dimitrov was one of the players to keep an eye on in 2017, conquering his first Masters 1000 title on August 20 in Cincinnati! Just like in good old times, Roger Federer and Rafael Nadal had grabbed the first four Masters 1000 titles of the season (that happened in 2005 and 2006 as well), and it was Alexander Zverev who stepped in to conquer Rome and Montreal.

Cincinnati was the perfect chance for most of the players to lift the first Masters 1000 trophy, with Roger Federer, Andy Murray, Novak Djokovic, Stan Wawrinka all being ruled out due to injuries, leaving the draw with only three top-10 stars.

Rafael Nadal never enjoyed Cincinnati's conditions that much despite the title won in 2013, suffering a heavy loss to Nick Kyrgios in the quarter-final and offering a chance for others to seek big title and 1000 points.

The only remaining Masters 1000 champion David Ferrer lost in the semi-final to Kyrgios in two tie breaks, which meant there were two first-time Masters 1000 finalists for the first time since Toronto 2002 when Andy Roddick and Guillermo Canas played for the title!

In the first title match at this level with players born in the 1990s, Grigor Dimitrov took down Nick Kyrgios to clinch the most significant crown in a career, finally delivering something that was expected from him years ago.

Grigor was the 7th seed and didn't face a top-15 player en route to the title, standing as one of the favorites after reaching the semis 12 months ago. The Bulgarian faced just 12 break chances in five encounters, fending off 11 and losing serve only once against Juan Martin del Potro in the third round.

It was an impressive week for the 26-year-old under studious guidance of Daniel Vallverdu who helped Grigor find the form right the start of the season (16-1 mark) and go all the way to become Masters 1000 champion. In the title encounter, one of the most important for both players, Dimitrov outplayed Nick Kyrgios 6-3, 7-5 in an hour and 25 minutes, emerging as a winner in almost every segment for a rock-solid triumph.

The Aussie was impressive in his win over Nadal, but outside serve he showed virtually nothing in this clash. Grigor had the upper hand in the rallies after implementing smart and well-measured tennis, preparing the perfect tactics with Vallvedru to tame Nick's strokes and expose his weaker sides.

Grigor served at 56% but his initial shot didn't let him down, losing only 13 points in 11 service games and saving those two break chances to keep them intact. On the other hand, Dimitrov had a clear advantage of Nick's second serve, taking ten out of 18 points and creating four break chances, converting one in each set for a comfortable win.

In 2017, Grigor Dimitrov won the title in Cincinnati without dropping a set.

The Bulgarian's defense was also one of the key elements in his success, moving around the court exceptionally and sliding to reach the ball in Novak Djokovic's style, always pushing Nick to play one extra shot.

With each additional stroke they played, Grigor had more chances to take the point after a superior display in the more extended exchanges. He won 15 out of 16 longest points, which made a huge difference, and 18 out of 30 in the mid-range exchanges, taking 33 out of 46 most extended rallies overall for a clear indicator of how well he covered the court and controlled his strokes.

Thanks to a massive number of service winners, Nick had a 39-34 advantage in the shortest points up to four shots, but that was far from enough to make an impact and give him a more favorable result. The essential stroke of this final was Dimitrov's slice backhand that took the pace away from the ball and kept Kyrgios playing from the awkward positions from where he was error-prone.

Grigor took power out from his strokes, hitting with an average speed of 66 mp/h while Nick couldn't do much with those shots, never finding the right rhythm and making a ton of mistakes. The Aussie fired 28 service winners and that turned out to be a majority of the points he won (52), which illustrates how inferior he was once the rally would start.

Grigor added 19 service winners and had a clear advantage in the winners from the field, with 13-5. Kyrgios placed 16 direct points from the court against Nadal but his powerful hitting just wasn't there in the final, finishing the match with miserable three forehand winners.

The Bulgarian kept his shots tamed, spraying only ten unforced errors while Kyrgios counted to 25, missing equally from both wings. The number of forced errors and double faults was similar for both, and that couldn't make the difference on the court, highlighting Kyrgios' unforced errors that determined the winner, as Grigor knew how to lure them. 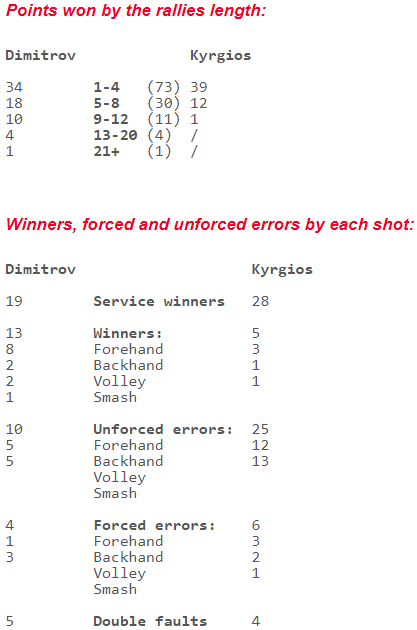