In one of the most accomplished seasons in the Open era, Jimmy Connors won 93 out of 97 matches in 1974, lifting 15 ATP titles, including three Major grass crowns to dominate like only a few players before him. In what had been the last US Open played on its original surface at the Forest Hills, Jimmy took down the great Aussie Ken Rosewall 6-1, 6-0, 6-1 on September 9, storming over the legendary opponent to forge one of the most one-sided Major finals ever!

It was the first out of five US Open crowns for the crowd favorite Connors, who would become the only player in history with titles on all three surfaces at a single Major, following more success on clay and hard in the upcoming years.

Just like in the title match at Wimbledon two months earlier, Rosewall couldn't do much against such a strong opponent, although we have to give him the full credits for reaching the final at 39 years, ten months and eight days, standing as the oldest player in the Major final.

Despite his age, Ken was still among the world's best players, justifying the 5th seed's status following the semi-final victory over John Newcombe that propelled him towards Connors clash. Another interesting fact gives us clear insight how consistent Rosewall was, playing in the US Open quarter-final on the day when Jimmy was born 22 years earlier and winning the title here in 1956 when his rival was just four years old!

It was all about Connors from start to finish, dropping 42 points and facing three break chances that he repelled to keep the serve intact and throw all the pressure on Rosewall. On the other hand, Ken never found his rhythm, getting broken eight times from 12 opportunities Jimmy created after giving away 35 out of 54 points behind his serve, hitting only five service winners.

Also, the veteran had modest eight winners from the field in comparison to 20 service winners from Connors and an additional 33 from the court, which was just too much for the Aussie to handle.

In 1974, Jimmy Connors lost just two games against Ken Rosewall at the US Open.

The American had 16 forced and 13 unforced errors, five more in total than Rosewall but with no chance of making any difference after Jimmy's 53 winners.

The home favorite had the upper hand in the rallies with more than five strokes after taking 20 out of 28, with only two points that went beyond the eighth shot. In the middle of the encounter, Connors grabbed 11 straight games and sealed the deal in 70 minutes.

Jimmy kicked off the match in emphatic fashion, taking the opening four games before Ken got his name on the scoreboard with three service winners in game five. That was all he could do, though, as Connors closed the set with three return winners at 5-1, taking the opener 6-1 in no time at all.

The worst was yet to come for Rosewall, who took miserable four points on serve in set number two, losing it 6-0 and sending Connors closer to the finish line. Interestingly, Jimmy had to fend off two break points in the opening game but it was one-way traffic after that since he won 23 out of the last 30 points to move a set away from the victory.

Again, Rosewall didn't make too many mistakes but was heavily beaten in the winners department, hitting two against 19 from the American. Jimmy saved another break chance at the beginning of the third set with a service winner and broke at love in the next game, rattling off ten in a row.

Ken finally ended his drought in game four when he held after repelling a break point, losing the remaining three games to drive Jimmy towards the title. Connors clinched the crown with a backhand volley at the net in game seven, landing an additional 20 winners in this set and outplaying his rival completely to write history as the last US Open champion on grass surface. 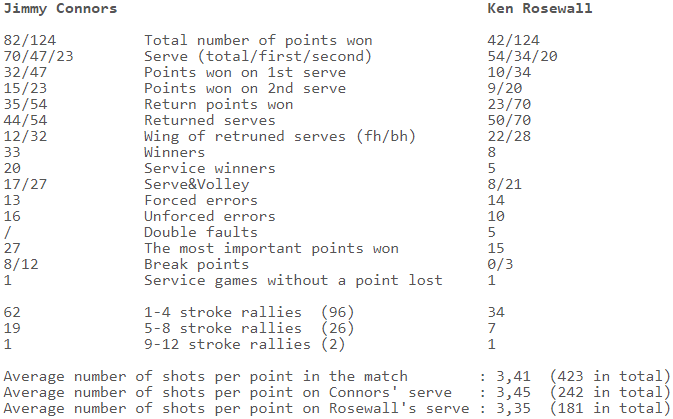