For 13 years, the world's best players had been gathering at the Madison Square Garden in New York for the ATP Tour World Championship, including the entire decade of the golden 80s. It all changed with the ATP Tour's formation in 1990, when the premium ATP event moved to Frankfurt, Germany.

In the Arthur Ashe Group, Edberg won all three matches, and Agassi reached the semis after beating Sampras and Sanchez in straight sets, finding his form and seeking the second notable title in 1990 after suffering Roland Garros and the US Open final losses.

After a commanding win over Sampras, Agassi lost to Edberg 6-7(2), 6-4, 6-7(5) despite being three points away from the victory, completing the round-robin stage with a rock-solid 6-0, 6-3 triumph over Sanchez in 53 minutes to secure the second place and the semi-final meeting with the 1988 champion Boris Becker.

Andre proved to be too strong in a 6-2, 6-4 victory for the 18th ATP final at 20, only the third on an indoor court. In the Cliff Drysdale Group, Boris Becker scored all three victories, while the five-time champion Ivan Lendl secured the place in the semi-final, losing to Stefan Edberg 6-4, 6-2 in another one-sided clash like the one that featured Agassi and Becker.

On November 18, Andre Agassi overpowered world no. 1 and the defending champion Stefan Edberg 5-7, 7-6, 7-5, 6-2 in three hours and 15 minutes to wrap up a perfect week and claim the biggest title in a career. Despite that round-robin loss to the Swede, it was clear that the American came to Frankfurt well prepared (Nick Bollettieri traveled with him) and ready to go all the way.

Agassi served well and improved his net game to keep the points on his racquet against the more accomplished and experienced serve&volley rivals. Stefan hit 44 service winners, but Andre added 32 to his tally, an excellent addition to his booming groundstrokes that helped him survive tight opening three sets and move closer to the finish line.

Agassi hit around 35 groundstroke winners, delivering fury and precision from both wings to leave Edberg far behind, having more success at the net in the volley department, always an essential fact against such a strong indoor player.

Agassi faced 17 break points and fended off an impressive 13 of those to limit the damage in his games and mount the pressure on Stefan, who got broken six times to lose the title, unable to match Agassi's pace in set number four.

In 1990, Andre Agassi dethroned Stefan Edberg at the Masters Cup.

The American secured a break already in the second game of the match after forcing Edberg's error with a powerful return, confirming the lead with a backhand down the line winner for a 3-0 after just 12 minutes.

Stefan pulled the break back in the seventh game following Andre's terrible backhand, having to play against two break chances in the next game to make a complete comeback. The Swede fired four winners to get out of jail and bring the game home for 4-4, clinching another break in the next game to move in front for the first time.

Serving for the set, Edberg got broken in the tenth game to keep Agassi in contention before forging another advantage with the third break, saving a break opportunity in game 12 and securing the set with two service winners for 7-5 after 58 minutes.

Andre repelled three break points at the beginning of the second set, and they both served well until 5-5 when Edberg had another chance to move in front. Andre stayed focused and fended it off with a volley winner, closing the game with a perfect backhand lob winner in one of the pivotal moments of the encounter.

The Swede served great in the entire set but suffered three mini-breaks in the tie break that Agassi claimed 7-5 after a beautiful forehand crosscourt winner, leveling the overall score and gaining momentum. Stefan hit a double fault to get broken at the start of the third set, pulling it back in game four after a terrible call from the umpire, as his forehand landed wide.

Agassi had to work hard in the eighth game, erasing three break points and stealing Edberg's serve in the 11th game after a return winner and two double faults from his rival, which would turn to be very costly. Serving for the set, Andre blasted five winners for 7-5, taking two sets to one lead after two hours and 42 minutes and taking another big step towards the title.

At 2-2 in set number four, Agassi blasted another great return that forced an error from Stefan, who had a colossal chance to get the break back a few minutes later when he created four break chances. Andre saved them all and moved 4-2 ahead after an unforced error from Edberg, maintaining the lead and putting one hand on the trophy after another break in game seven that pushed him 5-2 up.

The American opened the eighth game with two winners, and it was all over when Edberg netted an easy backhand, allowing Andre to celebrate the biggest title of his young career. 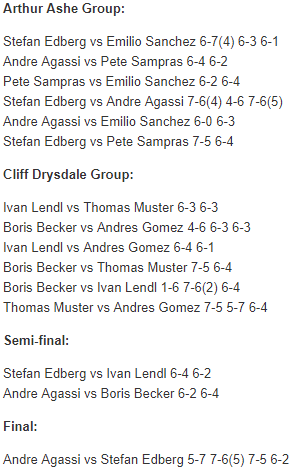