1993 was another exciting season on the Tour, which promoted Pete Sampras as the world's best player for the first time in his career. Michael Stich and Jim Courier were the only players with multiple Masters 1000 titles that year.

The closest rivals of Pete's eight ATP titles were Thomas Muster with seven, Michael Stich with six and Sergi Bruguera, Michael Chang and Jim Courier, who won five, all gathering in Frankfurt (except Muster) to compete at the Masters Cup between November 15-21.

Sampras was above them in the rankings, with some big changes in comparison to the previous seasons, as Boris Becker finished outside the top-10 to miss the Frankfurt cut despite being the defending champion. Ivan Lendl barely stayed in the top-20 before retiring next season, while another former champion Andre Agassi wrapped up the action outside the top-20!

The debutant in the field was talented young Ukrainian Andrei Medvedev, who had a breakthrough season to finish inside the top-6, proving his quality at this event after passing the round-robin stage. Another player who made his first appearance at the Masters Cup was the Monte Carlo and Roland Garros champion Sergi Bruguera, who failed to impress on the super-fast indoor carpet surface, losing all three matches.

He had the opportunity to play in Arthur Ashe Group with three stellar indoor players, who all beat him to decide the semi-finalists in the head to head matches. The last year's finalist Pete Sampras toppled both Edberg and Ivanisevic to stand at the top of the group and reach the final four for the third time in a row.

Goran prevailed against Stefan to join him in the title chase for the second straight year. In Stan Smith Group, Michael Stich shined in front of the home crowd to grab all three wins (failing to score any two years earlier) against Andrei Medvedev, Michael Chang and Jim Courier and advance as the leading player.

Medvedev earned the best possible debut, saving three match points against Courier and beating Chang to secure the place among the last four and make his season an even better one. Pete Sampras played one of his best matches of the year against the Ukrainian to score a 6-3, 6-0 triumph in 55 minutes, opening the battle with four aces and never looking back, passing the 1000-ace mark during the clash and reaching the second ATP Finals final in the strongest possible way.

The other semi-final provided much close battle, and Stich prevailed against Ivanisevic in two tie breaks after just two breaks in the entire encounter.

In 1993, Michael Stich defeated Pete Sampras for the only Masters Cup title.

They fired more than 70 service winners in a true serving contest, and Ivanisevic had his chances in both sets, wasting two break points at 4-4 in the opener and a 3-0 advantage in the second set, including a set point in the tie break at 7-6.

In the end, Stich converted the sixth match point for his eighth final of the season and a chance to continue where he left in Stockholm. On November 21, Michael Stich toppled world no. 1 Pete Sampras 7-6, 2-6, 7-6, 6-2 in two hours and 57 minutes for his biggest title since Wimbledon 1991.

Stich became the second consecutive German champion after Boris Becker and the first Masters Cup winner since Ivan Lendl in 1987 to wrap up the crown without losing a match! Michael claimed crowns on all four surfaces in 1993 and was the only player to beat Pete in the title matches, as the American won the previous eight finals that year.

It was their sixth meeting and the third win for Michael, who clinched ten points more than his rival, playing with more focus in both tie breaks to earn the victory in four sets and keep the trophy at home. It was the first Masters Cup title match with two tie breaks since 1988, and that pretty much determined the winner, as nothing could separate them in those sets, with both players converting four breaks of serve from 11 chances they created.

There were 90 service winners, and Michael hit 53 of those to grab the crucial advantage in the shortest points up to four strokes and erase the deficit in the more extended rallies that barely ever hit the 10-stroke mark.

They had a similar number of unforced errors, and Stich hit more winners and forced errors in a high-quality three-hour clash. The German broke in the very first game with a backhand winner after taming Pete's serve, holding in game two to confirm the break and settle into a nice rhythm.

Sampras saved another break chance in game three to avoid an even bigger deficit before the German fired four winners to move 3-1 up. The American had to save another break point in game five, serving at only 40% and struggling to find easy points that would make him holding more efficiently.

Stich had to play against five break chances in the sixth game, fending them off to keep his games intact and forging a 5-2 lead after a double fault from Pete in the seventh game. Serving for the set in the next game, Michael squandered two set points, and Pete pulled one break back with a backhand return winner to reduce the deficit to 5-3 and prolong the set.

The momentum was in his hands now, breaking again in game ten with a lob winner that left Michael unarmed, setting up a tie break two games later. Stich regained his composure in the last moment, winning the breaker 7-3 after 62 minutes to get his name on the scoreboard and gain a boost.

The second set kicked off in a more positive way for the American, who broke in the opening game when Stich netted a forehand. Sampras saved a break chance in the next game to bring it home with a beautiful volley winner, moving 5-2 in front with another return game after a solid return that Stich failed to control.

Pete held at love in the following game to take the set 6-2 and increase his chances for an overall win, hoping for more of the same in the rest of the clash. After five good holds at the beginning of the third set, the American saved a break point with a volley winner at 2-3 and closed the game with a booming serve for a 3-3.

They stayed neck and neck until the tie break that started with three mini-breaks, two for the German after groundstroke errors from his rival. Stich netted an easy smash in the following point but was the first to create a set point with a beautiful backhand return winner at 5-5.

Sampras saved it after a good return and attack to force an error from Stich, but Michael claimed the breaker 9-7 following a great volley that Pete couldn't tame. Things went from bad to worse for Sampras after a double fault at the start of the fourth set that cost him an early break, facing a mountain to climb if he wanted to perform a turnaround and fight for the title.

Stich blasted four aces to confirm the break and made another huge step towards the finish line with the second break in a row in game three when Pete sprayed a forehand mistake. Four more service winners sent Michael 4-0 up before saving a break chance in game six after three straight unreturned serves, sealing the deal with a commanding hold at 5-2 to celebrate the title in front of the partisan crowd. 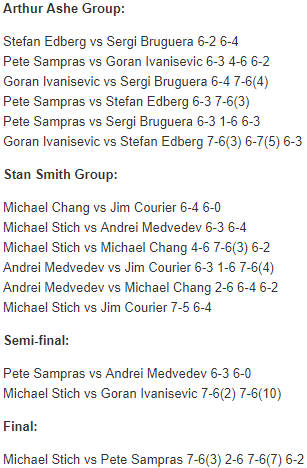