Pete Sampras and Andre Agassi highlighted the 1995 season on the ATP Tour, continuing where they left a year earlier. Unlike in the previous season, Sampras didn't have such a commanding lead over his closest rival, and less than 100 points separated them in the final ranking.

It was the best season in Agassi's career, winning 73 matches and seven titles from 11 finals, including the Australian Open and three Masters 1000 events. On April 10, Andre became world no. 1 for the first time but couldn't finish on the ATP throne, withdrawing from the Masters Cup due to a chest-muscle injury and leaving the door open for Pete to claim the year-end no.

1 honor for the third straight year. Pete won five titles in 1995 and split them nicely, with two Majors and Masters 1000 trophies in his hands, earning enough points in Paris to regain the throne and stay there despite not being able to defend the Masters Cup.

Thomas Muster won enormous 12 ATP titles to finish just behind the Americans, returning to the Masters Cup for the first time in five years. Yevgeny Kafelnikov, Wayne Ferreira and Thomas Enqvist were there to debut Frankfurt in the final edition of the ATP Finals in this town before moving to Hanover in 1996, leaving Festhalle Arena after six successful years.

The last year's finalists Pete Sampras and Boris Becker were drawn in the same group with debutants Ferreira and Kafelnikov, defeating the Russian. At the same time, the South African proved to be a much more formidable opponent.

Wayne barely missed a chance to topple Becker in the opening match before ousting Pete on the final day, still missing an opportunity to secure a place in the semis, with the American standing at the top of the group and Becker who finished second after losing to Pete 6-2, 7-6.

Thomas Muster lost all three encounters in Red Group, and a former two-time finalist Jim Courier also failed to pass the obstacles and enter the last four in his last appearance at the Masters Cup tournament. Thomas Enqvist had a brilliant run, scoring three wins to march towards the semis, and Michael Chang grabbed the remaining place in the elimination phase.

Michael had an excellent indoor season, improving his serve with the new, more oversized racquet he started using in 1994 and dethroning Pete Sampras after a 6-4, 6-4 triumph to reach the final, overpowering Sampras for the first time in seven matches.

In the other semis, Boris Becker had to give his best to beat Enqvist, prevailing 6-4, 6-7, 7-5 after 50 service winners that guided him towards the seventh Masters Cup title match and third in the last four years. There, he secured a 7-6, 6-0, 7-6 victory over Michael Chang in two hours and 16 minutes on November 19 to become the last champion in Frankfurt in front of the partisan crowd of 9000, also the fourth three-time champion at this event after Ilie Nastase, John McEnroe and Ivan Lendl.

It was the fourth meeting between Becker and Chang and the third triumph for the German, who had to play against just three break chances, losing serve once to keep the pressure on the other side all the time.

Chang's serve would never be good enough to overpower Becker, losing 42% of the points behind his initial shot and facing five break opportunities. Boris turned those into four breaks that carried him home safely despite a solid effort from the American in sets one and three.

Chang stayed on just above ten unforced errors, but Becker had many more winners thanks to his serve, forcing more mistakes from Michael to control his games nicely and dominating at the net against the rival who claimed only a few points after moving forward.

Becker outmuscled Chang with his backhand and volleys, blasting 49 service winners against Chang's 30 to forge the crucial lead in the shortest points up to four strokes. The German also controlled the mid-range rallies, and we saw only 16 points with six or more strokes, not enough for Michael to make the difference and impose his shots.

Chang made the better start, breaking Boris in the second game of the match with a smash winner and forcing an error from his rival to cement the lead and move 3-0 ahead. Everything worked well for the American in the opening eight games before he lost momentum in the crucial moment, getting broken in the ninth game to keep Becker in the set.

Boris had the edge after erasing a 5-2 deficit, hitting three winners to level the score at 5-5 and winning the tie break 7-3 after a service winner to secure the opener in 55 minutes. The German struggled a bit in the second set's opening game before bringing it home with two service winners, moving ahead with a break in game two following a volley winner.

The American lost the ground entirely and hit a double fault to suffer another break in the fourth game, trailing 5-0 after four winners from Becker in the next one. Chang wasted two game points that could have helped him to at least avoid a bagel, and Becker wrapped up a perfect set with a backhand down the line winner that moved him a set away from the title, looking good to seal the deal in the third.

After six good holds, Becker hit a double fault to offer Chang a break chance, saving it with a volley winner to keep his serve intact after a service winner. Serving to stay in the match at 5-6, Michael held after two deuces to reach the tie break where Becker grabbed an early mini-break in the second point.

Michael was back in contention after a double fault from the German in the fourth point before spraying a forehand error to fall 6-4 behind. Serving at 6-5, Becker landed an ace down the T line to clinch the victory and lift his third and last Masters Cup trophy in front of the enthusiastic home crowd that had been supporting him over the years in Frankfurt. 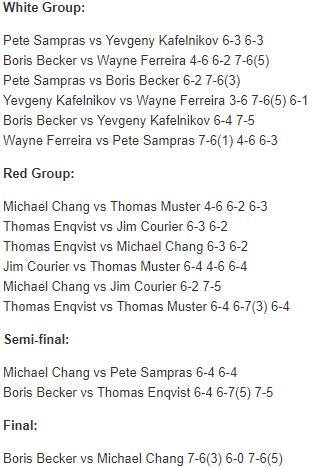 TODAY'S MOST POPULAR
NOVAK DJOKOVIC
Novak Djokovic: 'As much as it hurts me personally...'
ITF president: Our vision for Davis Cup is shared by Novak Djokovic, Rafael Nadal
2021 in Review: Novak Djokovic edges Denis Shapovalov for a winning start
'Rafael Nadal cried when I won Roland Garros,' great rival recalls
'This is what defines Rafael Nadal', says young ATP ace
Medvedev explains what changes he expects in game after Nadal and Federer retire
WTA CEO on emails received from Peng Shuai: They’re just 100% orchestrated
THIS WEEK MOST POPULAR
NOVAK DJOKOVIC
Novak Djokovic: 'We don't have enough information about...'
'We needed to help Novak Djokovic more', says ATP ace
Novak Djokovic: 'As much as it hurts me personally...'
Novak Djokovic: the domain is creaking
Rafael Nadal: "Roger Federer and I are in a complicated moment"
China rips WTA over decision to suspend all tournaments in China
Davis Cup 2021: Djokovic throws the racket in a moment of frustration