The second edition of the Davis Cup Finals will take place in Madrid between November 23-29. With more than eight months before the start of the event at Caja Magica, the organizers are hoping for a more stable situation with a coronavirus that has canceled all the action in March and April on all the levels, leaving hundreds of players without a job during that period.

Just a couple of hours after the ATP and ITF announced the six-week break, the Davis Cup Finals draw took place in London, bringing 18 countries into six groups, just like in 2019. The last year's champions Spain leads Group 1, facing Russian and Ecuador in the battle for the place in the quarters, seeking another strong run in front of the home fans.

The finalists from the first edition, Canada is the seeded team in Group B, playing against Kazakhstan and Sweden and looking quite dangerous again if they bring their best squad. France, Great Britain and the Czech Republic are in Group C, with the Britons attempting to embrace another deep run following the semi-final last November, losing to Spain 2-1 after a tight doubles encounter.

Croatia, Australia and Hungary are the rivals in Group D, with the Croats and the Aussies standing as the favorites in the quest for the place in the last eight, both winning Davis Cup titles in the past. The USA and Italy share the action again, joined by Colombia in Group E in the battle of three countries that all failed to reach the quarter-final in the first edition of the Davis Cup Finals.

In the end, the ATP Cup champions Serbia faces Germany and Austria in Group F, eager to chase another notable team event crown if world no. 1 Novak Djokovic decides to play. 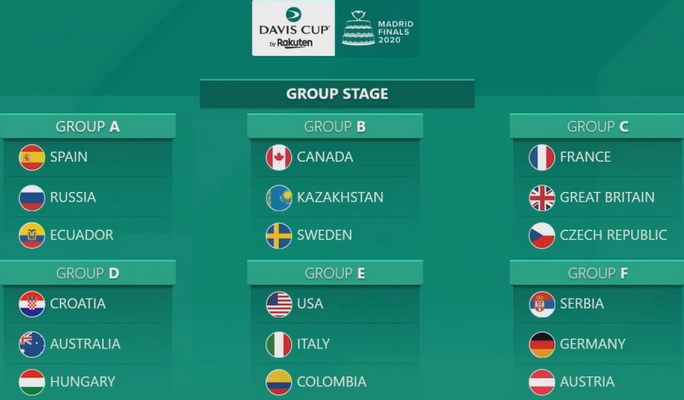