The Canada Open started way back in 1881, standing as one of the oldest active tennis tournaments with the US Open and Wimbledon, played simultaneously in Montreal and Toronto. The Canada Open became a part of the Open era in 1969 and earned the Masters 1000 status in 1990, gathering the best players in the world ahead of the season's fourth Major.

The four most dominant players in the last 15 years have won 14 of the previous 16 titles since 2004, with Jo-Wilfried Tsonga and Alexander Zverev as the only intruders in 2014 and 2017. The event did not take place in 2020 due to the pandemic, and many players from the top are absent again after their Olympic Games duties or injuries.

In the second round, Medvedev faces Daniel Evans or Alexander Bublik, with Taylor Fritz or Jannik Sinner awaiting in R3. Alex de Minaur, Jenson Brooksby, Kei Nishikori and Hubert Hurkacz are all packed in the top quarter, with intriguing encounters right from the opening rounds.

Andrey Rublev and Denis Shapovalov lead the second quarter, with John Isner and Sebastian Korda as their most dangerous rivals en route to the quarter-final meeting.

In the bottom quarter, the five-time champion and the winner of the last two editions Rafael Nadal starts against Lloyd Harris, who beat him in Washington, or a qualifier. The Spaniard would meet Grigor Dimitrov, Nick Kyrgios or Reilly Opelka in the third round, as the draw only gets more challenging.

Diego Schwartzman or Roberto Bautista Agut awaits Nadal in the quarters if he overcomes foot issues and passes dangerous rivals in the opening two matches. 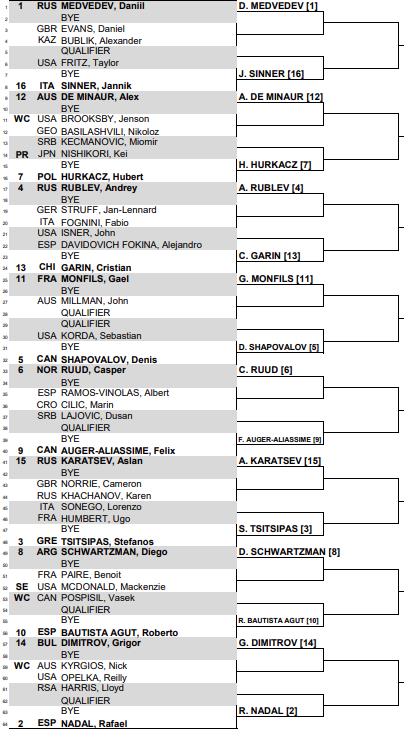