Located at beautiful Monte-Carlo Country Club, the first clay Masters 1000 event of the season will kick off in Monaco on Monday, in what will be the 113th edition of the tournament that goes way back to 1897! Monte Carlo became a part of the Open era in 1969 and it stayed on the calendar ever since, standing as one of the most favorite tournaments among the players.

Novak and Rafa are the top favorites to battle for the title next Sunday but some strong contenders will try to spoil their party and add their name to the list has only seen three names since 2005! Seeking the first Monte Carlo crown since 2015, Djokovic opens the campaign against Thanasi Kokkinakis or Philipp Kohlschreiber who defeated him at Indian Wells, with Jo-Wilfried Tsonga or Gael Monfils waiting in round three.

Daniil Medvedev and Stefanos Tsitsipas are the possible Djokovic's rivals in the quarters and the Serb will have to bring his best tennis right from the start to enter the semis. Roland Garros finalist Dominic Thiem, Kyle Edmund, David Goffin and Karen Khachanov form the second quarter and it should be interesting to see who will battle against Djokovic, Monfils or Tsonga for the place in the final.

Former finalists Kei Nishikori and Fernando Verdasco could meet in round two, with Borna Coric, Gilles Simon, Fabio Fognini, Felix Auger-Aliassime and the 3rd seed Alexander Zverev hoping to reach the semis from the third quarter.

In the bottom part of the draw, Marin Cilic, Lucas Pouille, Stan Wawrinka, Marco Cecchinato and Denis Shapovalov all stand against Rafael Nadal who skipped Miami to prepare for his beloved event where he lifted 11 trophies so far, opening the campaign against Roberto Bautista Agut or John Millman and setting eyes on the first title since Canada last year. 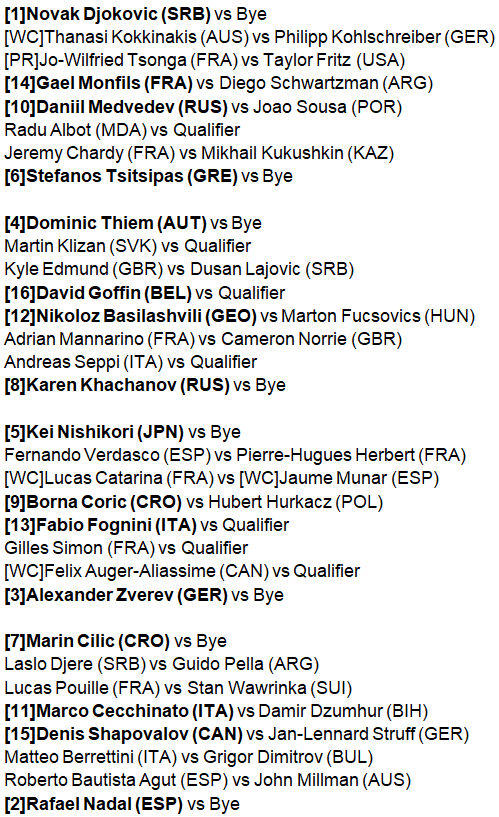