Staged at the Tennis Club de Genève at Parc des Eaux-Vives, the oldest and largest tennis club in Switzerland, the Banque Eric Sturdza Geneva Open returned to the ATP calendar in 2015 after being previously held between 1980-1991.

Bjorn Borg (his last ATP title), Mats Wilander and Thomas Muster have all won the title there before that absence and it was Thomas Bellucci who claimed the first event on the return in 2015. A home star Stan Wawrinka lifted the trophy in 2016 and 2017, receiving a wild card together with Fabio Fognini and David Ferrer last year but only to hand the crown to Marton Fucsovics.

The organizers have lost Daniil Medvedev and Fabio Fognini just before the draw but they got a surprising entrance of world no. 5 Alexander Zverev who has decided to use the opened space and make another try to play some matches ahead of Roland Garros.

Starting from Marrakech, the struggling German played in six straight weeks and grabbed only five wins, opting to play competitive encounters instead of training before Paris. Alexander will kick off the action against Ernests Gulbis or Yoshihito Nishioka, facing Peter Gojowczyk, Janko Tipsarevic, Hugo Dellien or Andreas Seppi en route to the semi-final.

Tipsarevic asked for a wild card, eager to extend his career and return into the top-100 as soon as possible, hoping to repeat the level from Houston and for the potential good result against Alexander. The defending champion and the 4th seed Marton Fucsovics plays Federico Delbonis or a qualifier in the opening clash, with Joao Sousa, Leonardo Mayer, Albert Ramos-Vinolas and Adrian Mannarino as the quarter-final opponents.

The third quarter brings Christian Garin, Taro Daniel, Denis Kudla, Jordan Thompson, Nicolas Jarry and Matthew Ebden, with two Chileans as the favorites to fight for the semi-final spot after good results on clay in 2019.

The two-time Geneva champion Stan Wawrinka seeks another title at home from the bottom quarter, facing Radu Albot, Mischa Zverev, Juan Ignacio Londero and the veteran Feliciano Lopez. The Swiss is back inside the top-30 for the first time in a year and he had time to rest for Geneva after an early exit in Rome to David Goffin. 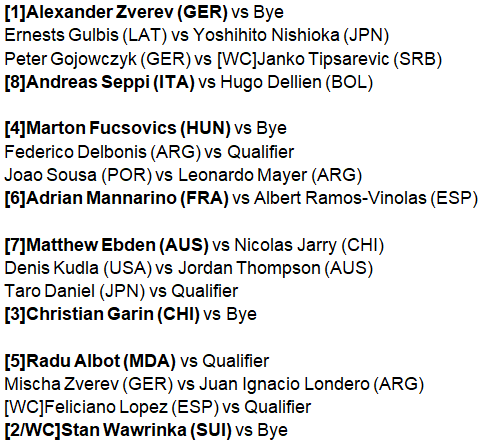