The ATP event in s-Hertogenbosch kicked off in 1990 and six years later the WTA circuit joined the action, with Anke Huber as the first champion. Martina Hingis went all the way in 2000, followed by Justine Henin, Kim Clijsters, Mary Pierce, Simona Halep, CoCo Vandeweghe and Aleksandra Krunic, setting another solid event this week with some prominent names in the draw.

Home star Kiki Bertens will try to become the first home champion since Michaella Krajicek in 2006, facing Johanna Larsson in the opening round before the second round clash versus Arantxa Rus or Bibiane Schoofs who both received wild cards.

In the battle of the qualifiers, Paolo Badosa Gilbert plays against Priscilla Hon and the winner of that one has to battle against Natalia Vikhlyantseva or Roland Garros semi-finalist Amanda Anisimova who will try to shift her form from clay to grass.

The 4th seed Lesia Tsurenko opens the campaign against Kristyna Pliskova before the second round meeting with Kirsten Flipkens or the defending champion Aleksandra Krunic. Qualifiers Varvara Lepchenko and Elena Rybakina seek the spot in the second round, with the winner from an all-Chinese clash between the 6th seed Saisai Zheng and Yafan Wang as the next opponent.

In the bottom quarter, the 7th seed Viktoria Kuzmova faces Margarita Gasparyan and with Mona Barthel, Greet Minnen, Veronika Kudermetova, Ons Jabeur, the struggling 2nd seed Aryna Sabalenka and the young gun Destanee Aiava as the remaining contenders for the place in the semis from there. 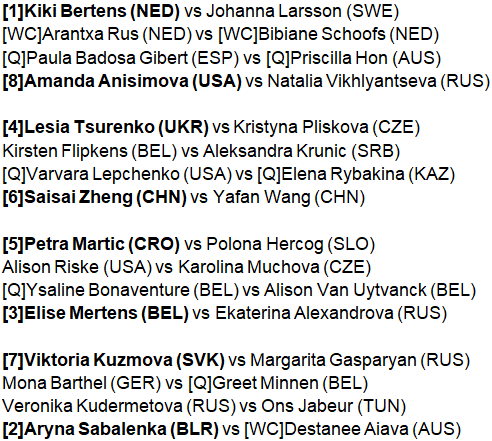 TODAY'S MOST POPULAR
Who is Roger Federer's worst rival?
THIS WEEK MOST POPULAR
Jeanne Evert Dubin, the younger sister of Chris Evert, Passes Away
Powered by: World(D) 1.6