The ATP tournament in Indianapolis had lost the license in 2009 and the event switched to Atlanta from 2010, staying in Georgia ever since. Home players were the dominant force in the first nine editions, occupying 13 out of 18 places in the final and winning eight out of nine titles, with one name standing out as the most prominent figure of the BB&T Atlanta Open.

Even before his ATP journey, John Isner had been the favorite tennis player in Atlanta, competing for the Georgia Bulldogs between 2003-2006 and winning more than 280 matches in singles and doubles for his University! The connections between Atlanta and Isner became even tighter when the ATP Tour came to this city and John was there to compete in every edition so far, reaching the final eight times and conquering five out of the last six trophies, losing to Nick Kyrgios in the title match in 2016.

John is only the fifth American player who has managed to win the same ATP tournament at least five times after Jimmy Connors, John McEnroe, Andre Agassi and Pete Sampras and he is the top favorite to go all the way next week as well.

Isner has played only one tournament after Miami and a nasty foot injury he suffered in the final against Roger Federer, losing early and signing to play Newport where he has won the title. John is still not at his best physically but will give his best to continue the winning streak in Atlanta, facing a challenging second-round test in Reilly Opelka or Alexander Bublik who was his rival in the final in Newport.

Daniel Evans, Radu Albot and Tennys Sandgren are the remaining players in the top quarter, all hoping to topple Isner and reach the semis. Alex de Minaur, Bradley Klahn, Marius Copil, Matthew Ebden, Frances Tiafoe and Bernard Tomic forge the wide-open second quarter, with another interesting part of the draw led by Pierre-Hugues Herbert and Jordan Thompson in the third quarter.

Taylor Fritz is the 2nd seed, with a possible second-round encounter against Grigor Dimitrov who received a wild card, together with Jack Sock, Ugo Humbert, Miomir Kecmanovic and college star Cole Gromley who are also there to seek the place in the semis. 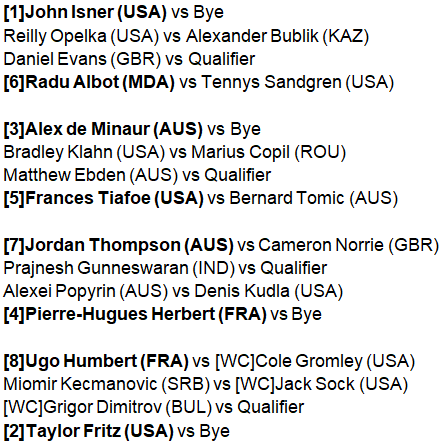