The Abierto de Tenis Mifel presentado por Cinemex will kick off for the fourth straight year next week in Loso Cabos, offering one of the biggest prize money among the ATP 250 events. Staged in the same week as the ATP 500 event in Washington, the organizers have given their best to gather a strong field despite some withdrawals, with the defending champion Fabio Fognini and Guido Pella as the top seeds.

Fognini had a mediocre run on clay in the last couple of weeks and will try to bounce back here in Mexico where he has 250 points to defend, facing Lucas Gomez or Marcel Granollers in the second round. Prajnesh Gunneswaran, John Millman and an in-form American Taylor Fritz are in the first quarter as well, with Fritz seeking another good result after reaching the final in Atlanta.

The bottom quarter is very interesting, gathering Guido Pella who decided to skip clay and ask for a wild card here, a struggling pair of Grigor Dimitrov and Steve Johnson who are on the worst ranking positions in years, Juan Ignacio Londero and Cedrik-Marcel Stebe.

The German is still in Gstaad, competing in his first ATP final in career and seeking the same kind of result in Los Cabos as well. 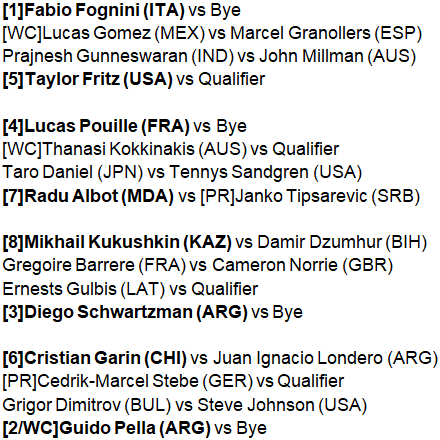