The Olympic Stadium in Moscow will host the 30th edition of the VTB Kremlin Cup, having been organized since 1990 as the first international professional tennis even in the Soviet Union. Players like Goran Ivanisevic, Yevgeny Kafelnikov, Nikolay Davydenko, Richard Gasquet and Marin Cilic had won the title here in the past and Kafelnikov is by far the most successful player, winning five titles in a row in front of the home crowd between 1997 and 2001.

Karen Khachanov claimed the title in 2018 and it should stay in the country if the top seed Daniil Medvedev decides to play after another thrilling week in Shanghai where he won the second Masters 1000 title of the season.

Daniil has played in six straight finals since Washington and will seek the seventh in Moscow, facing Alibek Kachmazov or Alen Avidzba in the second round, with two teenagers fighting for the win on the ATP debut. Egor Gerasimov, Thomas Fabbiano, Andrey Rublev and Alexander Bublik are also in the top quarter, with Andrey and Alexander as one of the most anticipated clashes of the opening round.

The struggling Croat Marin Cilic is the 3rd seed, hoping to grab much-needed wins and points against Ivo Karlovic, Aljaz Bedene, Jeremy Chardy, Nicolas Jarry, Miomir Kecmanovic or Artem Dubrivnyy and reach the first semi-final of the season, winning the title here in 2014 and 2015.

Adrian Mannarino and Dusan Lajovic lead the third quarter, joined by Damir Dzumhur, Evgeny Donskoy, Mikhail Kukushkin, Juan Ignacio Londero and Lukas Rosol in a wide-open battle for the semis. In the bottom quarter, the defending champion Karen Khachanov seeks another good run in front of the home fans after a mediocre season, having a nice chance of reaching the semis if he brings his best tennis, facing Philipp Kohlschreiber or Pierre-Hugues Herbert in the second round. 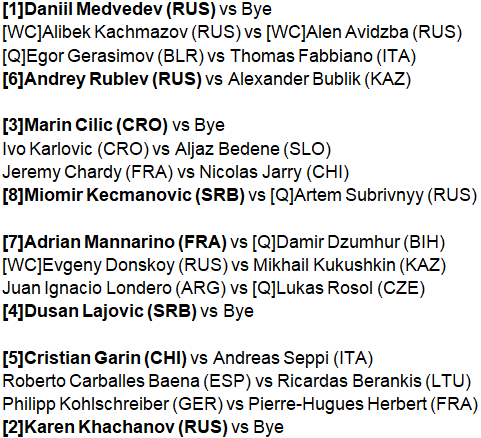 TODAY'S MOST POPULAR
TENNIS STORIES
Dominic Thiem's ​​new girlfriend!
'It was a terrible sight, Roger Federer could hardly move', says writer
'Novak Djokovic's athleticism is from another world', says ATP legend
Former coach: 'Rafael Nadal and Novak Djokovic will win only one Major in 2021'
Jo-Wilfried Tsonga: 'After beating Roger Federer, I urinated blood'
'Roger Federer, Nadal, Djokovic get their energy from the live fans', says ATP ace
'Roger Federer makes it fun', says agent
THIS WEEK MOST POPULAR
MARIA SHARAPOVA
Maria Sharapova: "That's why I never took US citizenship"
Roger Federer: 'After I end my tennis career I would live...'
Raffaella Reggi: "Serena Williams has lost shine"
Simon Graf: 'Roger Federer ruined Rafael Nadal's Australian Open celebration'
Rafael Nadal: 'All I can do is accept it and take the path of peace'
Chardy against Novak Djokovic and Serena Williams because ...
'We saw Novak Djokovic looked like he was punch-drunk', says top coach