ATP Tour had visited Basel for the first time in 1975 and stayed in this picturesque town ever since, attracting some of the biggest names in the world of tennis. Bjorn Borg, Guillermo Vilas, Ivan Lendl, Stefan Edberg, Jim Courier, John McEnroe, Boris Becker, Pete Sampras, Novak Djokovic and Juan Martin del Potro had all celebrated here in the past but the hometown hero Roger Federer stole the glory from all of them, winning nine titles overall and advancing into 12 straight finals since 2006!

The Swiss is the top here and the top favorite to claim the tenth crown and extend his Basel streak to 25 triumphs. Federer will kick off the campaign against a qualifier, facing Radu Albot or Dusan Lajovic in the second round and setting the possible quarter-final clash versus Stan Wawrinka (they played here in Basel in 2011), Pablo Cuevas, Frances Tiafoe or Daniel Evans.

In the second quarter, Stefanos Tsitsipas and Fabio Fognini are the players to beat, competing against Albert Ramos-Vinolas, Pablo Andujar and Filip Krajinovic who is through to the final in Stockholm. The 6th seed David Goffin will battle versus Marin Cilic in the clash of a former finalist and 2016 champion, with Marin standing as one of three players who have taken the title away from Roger since 2006, together with Juan Martin del Potro and Novak Djokovic.

In the bottom quarter, the 2nd seed Alexander Zverev has to topple Taylor Fritz, Alex de Minaur, Benoit Paire, Henri Laaksonen, Jan-Lennard Struff and Miomir Kecmanovic, hoping for another good run after Beijing and Shanghai and to secure a spot at the ATP Finals where he has to defend the title. 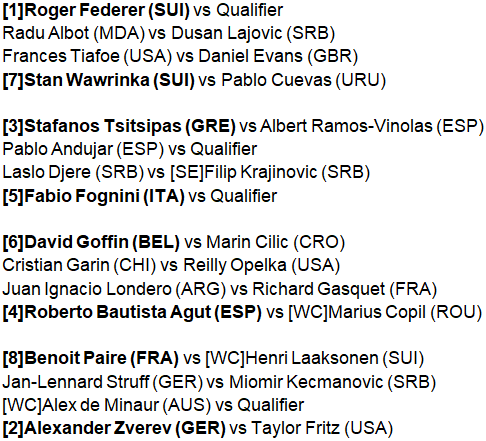