The Austrian capital Vienna had hosted the first ATP tournament in 1974, with the Americans as the dominant force in the opening ten events, winning eight titles, including four for Brian Gottfried. Ivan Lendl, Michael Stich, Goran Ivanisevic, Andre Agassi, Boris Becker, Pete Sampras, Tommy Haas, Roger Federer, Novak Djokovic, Juan Martin del Potro and Andy Murray are among the winners of this prestigious indoor event and we should get a new champion, with Kevin Anderson deciding to skip the rest of the season after an injury.

Thiem never reached the semi-final in Vienna and should bring his best tennis from the very first round to change that, facing 2011 winner Jo-Wilfried Tsonga in the first round and the better from that one battling against Nikoloz Basilashvili or Fernando Verdasco for the place in the quarters.

Pablo Carreno Busta, Stockholm finalist Denis Shapovalov, Borna Coric and Mikhail Kukushkin complete a strong top quarter, with many exciting matches right from the first round. The second quarter is packed with rock-solid players, with Matteo Berrettini, Kyle Edmund, Grigor Dimitrov, Hyeon Chung, Milos Raonic, Felix Auger-Aliassime and Andrey Rublev, all of those seeking the place in the semis and that potential clash against Thiem or Tsonga.

Guido Pella and Gael Monfils lead the third quarter, challenged by 2004 champion Feliciano Lopez, Gilles Simon and a young gun Jannik Sinner who fought in the semi-final in Antwerp to earn a chance of competing in Vienna as well. 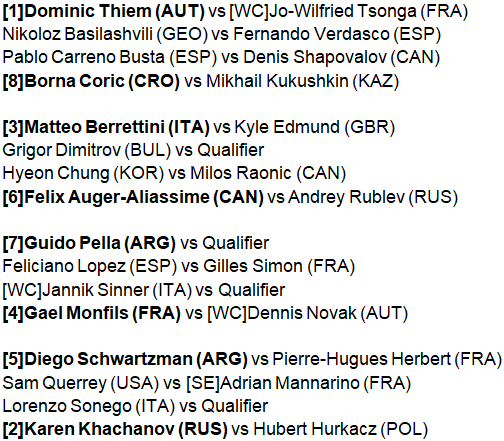