After a few years of absence, an indoor event in Paris moved to Bercy in 1986 and it became one of the most prestigious tournaments of the last part of the season, with Boris Becker as the first champion. Stefan Edberg, Goran Ivanisevic, Andre Agassi, Pete Sampras, Marat Safin, Novak Djokovic, Roger Federer and Andy Murray had all won the title here after the German, with some memorable finals that played the key role in the year-end rankings.

That should be the case next week as well, with the four-time champion Novak Djokovic looking to close the gap to Rafael Nadal in the ATP Race and keep chances for the year-end no. 1 spot in London. Almost all the players from the top-20 are in the draw, including Roger Federer, an in-form Russian Daniil Medvedev and his compatriot Karen Khachanov who will try to defend the title and 1000 points after a mediocre season so far.

Novak Djokovic will open the campaign against Dusan Lajovic and Richard Gasquet, with Kyle Edmund and Diego Schwartzman as the potential rivals in the third round. In the quarters, Novak should face Stefanos Tsitsipas, Roberto Bautista Agut, Alex de Minaur, Frances Tiafoe or Taylor Fritz, with all these players hoping to topple the world's leading player and reach the semis from the top quarter.

The 4th seed Daniil Medvedev seeks the seventh consecutive ATP final, leading the second quarter together with Dominic Thiem who will try to reach the final in Vienna first on Sunday. John Isner, David Goffin, Grigor Dimitrov and Milos Raonic are the players who will try to spoil Medvedev's and Thiem's party and beat the better-ranked opponents to earn the semi-final spot.

2011 Paris champion Roger Federer leads the third quarter, taking some rest after the quarter-final loss in Shanghai to Alexander Zverev who could be his rival in the battle for the semis in Paris as well. Roger is in the semi-final in Basel while Alexander lost early at the same event, needing a good run in Paris to secure the place among the top-8 players in the ATP Race and get the opportunity to defend the title in London.

Roger and Alexander have to beat Borna Coric, Fernando Verdasco, Gilles Simon, Denis Shapovalov and more London contenders Fabio Fognini and Gael Monfils to set that quarter-final clash that should be the one to watch if they both bring their best tennis. 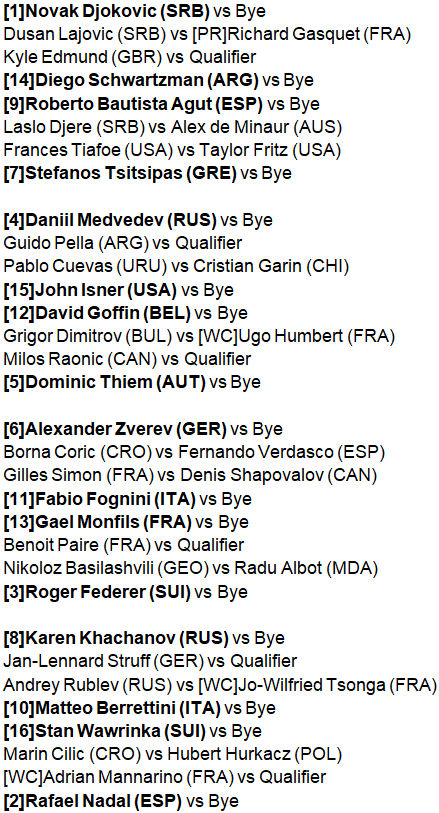 TODAY'S MOST POPULAR
ROGER FEDERER
'Roger Federer is a hundred times more legendary than...', says ATP ace
Wilander: "Novak Djokovic can play another ten years"
'A lot of people have been captivated by Roger Federer, Nadal, Djokovic', says star
'Novak Djokovic is a tad too ambitious with his goals', says ATP legend
Rafael Nadal on his first win over Roger Federer: 'It was almost perfect'
'I wish that Roger Federer will be back on the court soon', says WTA star
Novak Djokovic: 'I'm not in touch with Steffi Graf but...'
THIS WEEK MOST POPULAR
ROGER FEDERER
Roger Federer says goodbye to a dream
The importace of Xisca Perello for Rafael Nadal
John McEnroe: "Media? I agree with Naomi Osaka"
Serena and Venus Williams: forged as champions
Zverev: "I don't care what Boris Becker says"
Kyrgios and Tsitsipas attack each other through social media!
The funny video of the comedian who imitates Federer, Djokovic and Nadal