The 28th edition of the Qatar ExxonMobil Open takes place at the Khalifa International Tennis and Squash Complex in Doha between January 6-11, marking the beginning of the ATP season together with the ATP Cup. Unlike in the past three decades, the organizers in Doha didn't have to compete against the fellow ATP 250 tournaments but the inaugural team event, gathering a solid field of those who didn't want to travel to Australia that early or didn't find the place in the national squad.

Five players from the top-40 will fight for the crown next week, with a former finalist Stan Wawrinka leading the action as the top seed ahead of 2018 finalist Andrey Rublev. Just like Roger Federer, Wawrinka decided to skip the ATP Cup and kick off the season in Doha, returning for the sixth time and seeking a good result after earning only six victories at this event so far.

Stan will face Jeremy Chardy or a qualifier in the second round, with Aljaz Bedene, Alexander Bublik or Adrian Mannarino waiting in the quarter-final in what looks like a fine draw for the three-time Major champion. The second quarter is much more competitive, with Milos Raonic, Filip Krajinovic, Fernando Verdasco and Kyle Edmund as the potential semi-final candidates from there.

2012 champion Jo-Wilfried Tsonga and Frances Tiafoe are the seeded players in the third quarter, facing Miomir Kecmanovic, Jordan Thompson and Ricardas Berankis before a possible clash for the spot in the last four. In the bottom quarter, 2018 finalist Andrey Rublev seeks strong start of the year against Laslo Djere, Lorenzo Sonego, Marco Cecchinato, Pierre Hugues-Herbert, Malek Jaziri and Mikhail Kukushkin, with good chances of reaching the semis from there. 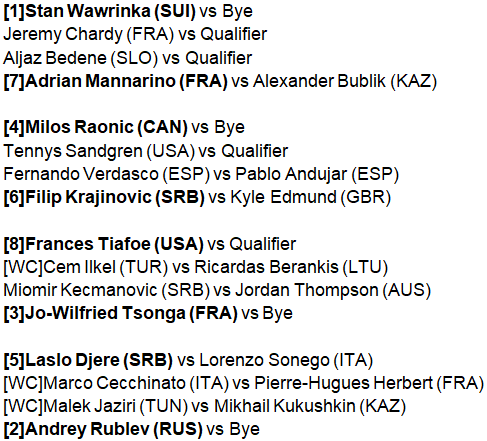