The 12th edition of the WTA Premier event in Brisbane takes place next week, kicking off the action on the WTA Tour together with Auckland and Shenzhen. Since 2009, almost every notable name from the WTA Tour has visited Brisbane, with Victoria Azarenka, Kim Clijsters, Petra Kvitova, Serena Williams, Maria Sharapova, Karolina Pliskova and Elina Svitolina all finding a place on the list of champions, with more Grand Slam winners on the runner-up spot.

Besides that, more top-20 competitors will join the title hunt, together with a former champion Maria Sharapova who received a wild card, competing for the first time since the US Open. Roland Garros and WTA Finals champion Ashleigh Barty could open the campaign against Sharapova, settling the second round clash if the Russian beat a qualifier in the first round.

Sloane Stephens, Anastasia Pavlyuchenkova and the 5th seed Petra Kvitova are also in the top quarter, with exciting matches right from the very first day. Elina Svitolina and Madison Keys lead the action in the second quarter, trying to arrange the quarter-final meeting if they overcome Danielle Collins, Samantha Stosur, Angelique Kerber and Donna Vekic who all want to show their best tennis at the first event of the year.

Kiki Bertens has to beat the upcoming Ukrainian Dayana Yastremska in the first round to make a winning start, with Sofia Kenin and Maria Sakkari as other dangerous players in the third quarter, together with the 3rd seed and a two-time Major champion Naomi Osaka.

In the bottom quarter, world no. 2 and the defending champion Karolina Pliskova goes for the third Brisbane crown in the last four years, facing the Aussie in the second round and Johanna Konta, Barbora Strycova, Alison Riske or Karolina Muchova in the potential quarter-final. 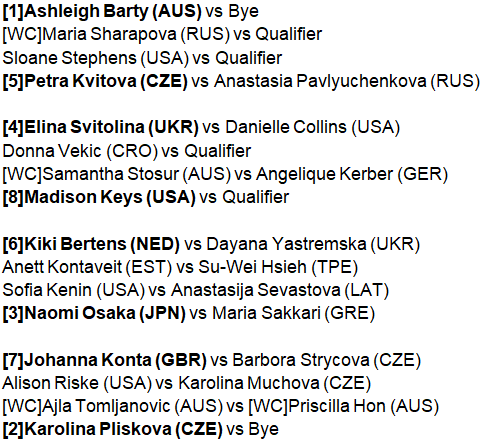