The 35th edition of the ASB Classic in Auckland takes place next week, gathering a solid field of players who will fight for the first title of the season. Marion Bartoli, Jelena Jankovic, Lindsey Davenport, Elena Dementieva, Agnieszka Radwanska, Ana Ivanovic, Venus Williams and Sloane Stephens are some of the champions in Auckland in the past 15 years, with the German Julia Goerges taking the crown in 2018 and 2019.

The crowd will have the opportunity to see watch some notable players in action next week as well, with the 23-time Major singles champion Serena Williams leading the draw, playing for the first time since the US Open last September.

Serena will face another Grand Slam champion Svetlana Kuznetsova in the first round, hoping for a winning start and chance to play versus Christina McHale in round two ahead of the potential Cori Gauff clash in the quarter.

The 15-year-old already had an opportunity to work with her idol, seeking their first official match after beating Venus last year at Wimbledon. Cori kicks off the campaign against Viktoria Kuzmova before the second-round meeting against Laura Siegemund or Alison Van Uytvanck.

In the second quarter, another young American Amanda Anisimova faces Kateryna Kozlova in the first round, with Carla Suarez Navarro, Daria Kasatkina, Eugenie Bouchard, Kirsten Flipkens, Taylor Townsend and Caroline Garcia in the battle for the place in the semis.

Caroline Wozniacki is playing in Auckland for the last time before she retires at the Australian Open, leading the third quarter with the defending champion Julia Goerges, Paige Hourigan, Lauren Davis, Jil Teichmann and Valentina Ivanov for the spot in the last four. 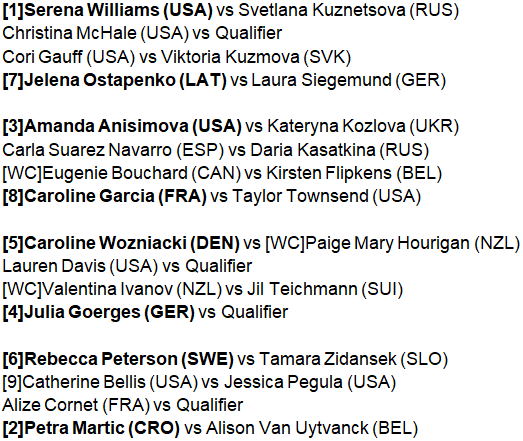