The ASB Classic is the biggest men's professional sporting event in New Zealand, having been staged in Auckland ever since 1956. It became a part of the Open era in 1971 and has been a regular stop on the Tour starting from 1974 when Bjorn Borg claimed his first ATP title there.

Miloslav Mecir, Thomas Enqvist, Marcelo Rios, Gustavo Kuerten, Fernando Gonzalez, David Ferrer, Juan Martin del Potro and John Isner had also won the tournament in the past and we will see whose name will appear on the trophy this week, with a solid field of players ready to chase the crown.

Daniil Medvedev, Fabio Fognini, Denis Shapovalov, Karen Khachanov and John Isner were the players who signed to play in Auckland just before the Australian Open but the ATP Cup was certain to cause some mess and shifts, with the top seed Daniil Medvedev deciding to withdraw from the ASB Classic ahead of Saturday's clash with Novak Djokovic in Sydney.

Thus, Fabio Fognini will lead the field, facing Feliciano Lopez or Pablo Andjuar in the second round and a much more challenging rival in the quarters, probably the rising Pole Hubert Hurkacz who is already off to a great start.

Karen Khachanov and Benoit Paire are the seeded players in the second quarter, having to beat Michael Mmoh, John Millman, Cameron Norrie, Thiago Monteiro and the super talented Italian Jannik Sinner before a potential quarter-final clash.

Two-time champion John Isner will try to bounce back after terrible results in January in the last couple of years, struggling at the ATP Cup as well and looking to embrace a deep run and fight for the title ahead of the Australian Open. 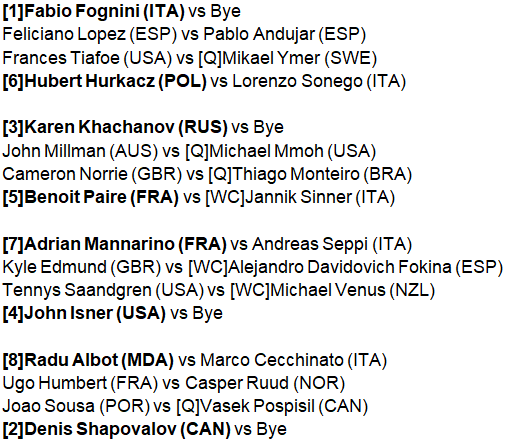 TODAY'S MOST POPULAR
RAFAEL NADAL
'When Rafael Nadal began to stand out as a tennis player...', says Xisca
Maria Sharapova: 'Serena Williams is among the greatest athletes ever'
'It doesn't have a big influence on Roger Federer', says top coach
Rafael Nadal: 'This year the season has a different calendar and...'
'You immediately felt the joy that Roger Federer can...', says top coach
Naomi Osaka is the new face of Louis Vuitton
'Roger Federer was looking ahead', says his coach
THIS WEEK MOST POPULAR
WTA TENNIS
Venus Williams getting married soon?
Garbine Muguruza: "Roger Federer's proposal will end up in oblivion"
'There was no way Roger Federer could win matches...', says legend
Naomi Osaka's last quarantine post infuriated the fans!
'We would beat Roger Federer, Rafael Nadal and Djokovic now', says ATP ace
'Rafael Nadal and Novak Djokovic each came with 10 people', says doubles player
Serena Williams' daughter shows her two-handed backhand!