There, Pella ousted Schwartzman in straight sets to advance into the semis together with other South American players, setting an all-Argentine clash with Juan Ignacio Londero in the battle for the title. World no. 112 Londero ousted Pella in three sets to claim the first ATP title and become the inaugural champion, with both players signing to play Cordoba again in 2020.

The leading Argentine player Diego Schwartzman is the top seed pf the first clay-court event of the year, heading to Cordoba after a solid Australian Open campaign and facing Leonardo Mayer or Jaume Munar in the second round.

Pablo Andujar plays against the young gun Francisco Cerundolo who is making his ATP debut in front of the home fans. Albert Ramos-Vinolas and a qualifier close the first quarter, with exciting matches en route to the semi-final.

Laslo Djere and the defending champion Juan Ignacio Londero will try to set the quarter-final meeting if they beat Roberto Carballes Baena, Hugo Dellien, Pedro Cachin and Marco Cecchinato, which will not be easy. Cristian Garin took a wild card as the third seed, with Pablo Cuevas, Federico Delbonis, Gianluca Mager, Lorenzo Sonego and Attila Balazs trying to stop him before the semis and seeking solid points for themselves.

Guido Pella and Fernando Verdasco lead the fourth quarter, with four solid lower-ranked clay-courters who are looking for potential surprises and the place in the last four. 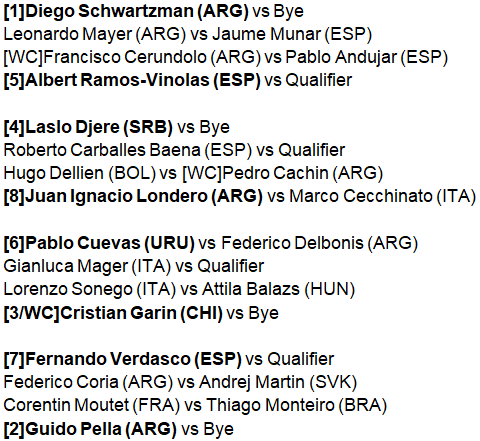