After 22 years in Chennai (Roberto Bautista Agut was the last champion in 2017), the only ATP event in India moved to Pune, with the third Tata Open Maharashtra edition going on this week. Losing the place in the first week of the calendar thanks to the ATP Cup, Pune now shares the post-Australian Open week with Cordoba and Montpellier, having only one player from the top-60 in the main draw!

Gilles Simon and Kevin Anderson are the first two champions in Pune but none of them will play in India again, with Benoit Paire as the top seed ahead of what looks more like a Challenger field, offering a chance for numerous players to chase the first ATP title if Paire fails to win four matches.

Paire will seek the first final at this event after four semi-final losses, facing a qualifier in the second round before the quarter-final clash against Taro Daniel, Sasikumar Mukund, James Duckworth or Peter Gojowczyk, looking like the favorite to grab the last four spot from there.

In the second quarter, the young Korean Soonwoo Kwon leads the field for the first time, battling against Prajnesh Gunneswaran or Yannick Maden in the second round, with the winner from there facing Antoine Hoang, Egor Gerasimov or Paolo Lorenzi in the quest for the semis.

The third quarter is another wide-open part of the draw, led by two Italians Salvatore Caruso and Stefano Travaglia. The home stars Ramkumar Ramanathan and Arjun Kadhe will try to make a name for themselves, together with Jiri Vesely, Ilya Ivashka and Evgeny Donskoy.

In the bottom quarter, Yuichi Sugita and Ricardas Berankis are unexpected seeds, with Thomas Fabbiano, Sumit Nagal, Ivo Karlovic and Cedrik-Marcel Stebe all trying to reach the semis and stay on the title course. 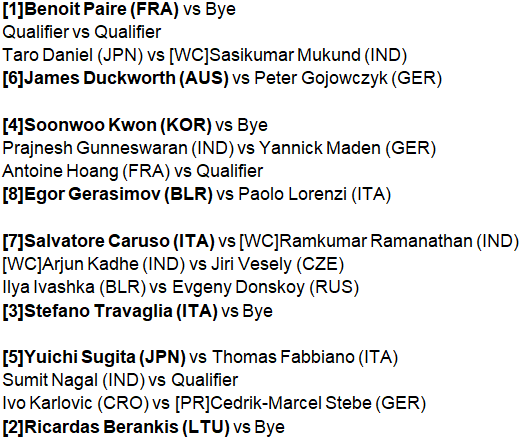