The Buenos Aires Lawn Tennis Club will host the 20th edition of Buenos Aires Open, gathering excellent clay courters who will battle for the title in the second stop of the Latin American "Golden Swing" after Cordoba.

Gustavo Kuerten, Carlos Moya, Guillermo Coria, Gaston Gaudio, David Nalbandian, Tommy Robredo, Juan Carlos Ferrero, David Ferrer and Rafael Nadal had all won the title here in the past, joined by Dominic Thiem who went all the way in 2016 and 2018.

The Austrian has decided to skip Buenos Aires after reaching the final at the Australian Open (together with Matteo Berrettini), leaving home stars Diego Schwartzman and Guido Pella as the top seeds and title favorites. Schwartzman is through to the final in Cordoba and will seek another significant result at home, facing Federico Delbonis or Hugo Dellien in the second round.

Albert Ramos-Vinolas, Leonardo Mayer, Lorenzo Sonego and Pablo Cuevas are also in the top quarter, all hoping to beat Schwartzman who could be tired following a deep run in Cordoba. Buenos Aires debutant Borna Coric leads the second quarter, preparing for the clash against Jaume Munar or Thiago Monteiro in the second round and more challengers in the quarter-final, with Corentin Moutet, Facundo Diaz Acosta and Cordoba finalist Cristian Garin all seeking that semi-final spot.

The last year's semi-finalist Guido Pella will try to bounce back after an early exit in Cordoba, playing against Cordoba semi-finalist Andrej Martin or a qualifier in the second round. The 6th seed Laslo Djere, the young Argentine Francisco Cerundolo and Juan Ignacio Londero are also in the bottom quarter that will see some intriguing matches as well if they all produce their best tennis. 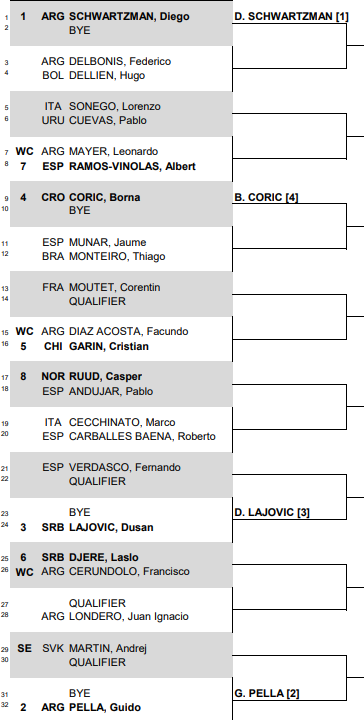 TODAY'S MOST POPULAR
ATP TENNIS
Daniil Medvedev won't challenge Djokovic, Nadal in Monte Carlo after testing positive
'Without Roger Federer, Nadal and Djokovic, a lot of people...', says legend
Alexander Zverev: 'I'm happy for Hubert Hurkacz, Jannik Sinner; it's good for tennis'
'I think Roger Federer is the only one who is able...', says Djokovic's brother
Roger Federer: 'Rafael Nadal would have found a way to exploit...'
'Novak Djokovic will not retire before breaking every record,' warns Alexander Zverev
Rafael Nadal shares interesting details about his injury
THIS WEEK MOST POPULAR
GOLF
Tiger Woods believed that he was in Florida
Rafael Nadal confirms - 'Roger Federer is the best player, but I still remember..'
Dominic Thiem's ​​manager attacks Novak Djokovic and the PTPA
Roger Federer withdraws from Rome. Will he play on clay this year?
Nick Kyrgios withdraws from French Open
Update on Roger Federer's plans after the postponement of Roland Garros
'I was sitting in the players' lounge when Rafael Nadal...', says former player