The roots of the Cincinnati Open can be traced way back to 1899 and Avondale Athletic Club, developing into one of the most prestigious events in the USA in the last couple of decades. It was mainly played on clay until 1979 when the tournament switched permanently to hard courts, becoming a regular stop on the ATP Tour since 1970.

Unlike in the past, the tournament will look much different due to the coronavirus, leaving Ohio and settling at the U.S.T.A. Billie Jean King National Tennis Center in New York. There will be no crowd to watch matches, and the players have to follow strict health measures, with most of them staying in the bubble during the next three weeks.

Novak Djokovic and Dominic Thiem are top seeds at the frist ATP event since February.

Cincinnati is also the first Masters 1000 event of the season, led by world no. 1 and 2018 champion Novak Djokovic. Novak is the only big 3 player in New York, with Rafael Nadal and Roger Federer skipping Cincinnati and the US Open.

After five losses in the finals between 2008-2015, Novak finally won the crown in Cincinnati in 2018, completing the Career Golden Masters after beating Roger Federer in the title match. Novak is yet to lose in 2020, winning all 18 singles encounters and claiming Serbia's title at the ATP Cup and his individual crowns in Melbourne and Dubai.

The Serb will open the campaign against Tommy Paul or a qualifier in the second round, with Tennys Sandgren, Lorenzo Sonego, Nikoloz Basilashvili or the young gun Felix Auger-Aliassime awaiting in round three. Novak will probably have to work harder in the quarter-final, with David Goffin leading that part of the draw.

The Belgian has to beat Denis Shapovalov, Marin Cilic, Alex de Minaur and Borna Coric to set Djokovic clash, with other players wanting to get that opportunity. The defending champion Daniil Medvedev and Roberto Bautista Agut are the players to beat in the second quarter, facing Taylor Fritz and Karen Khachanov before the eventual clash in the battle for the semi-final.

Matteo Berrettini and Stefanos Tsitsipas are the top seeds in the third quarter, with a solid group of players waiting to spoil the party and advance. Reilly Opelka, Casper Ruud, Diego Schwartzman, John Isner, Kyle Edmund and Kevin Anderson will try to beat the better-ranked rivals and claim a notable result in the first comeback event following the coronavirus outbreak.

In the bottom quarter, Alexander Zverev and Dominic Thiem have to topple Frances Tiafoe, Andy Murray, Milos Raonic, Andrey Rublev and Grigor Dimitrov to set the quarter-final encounter, with many exciting matches coming from this part of the draw. 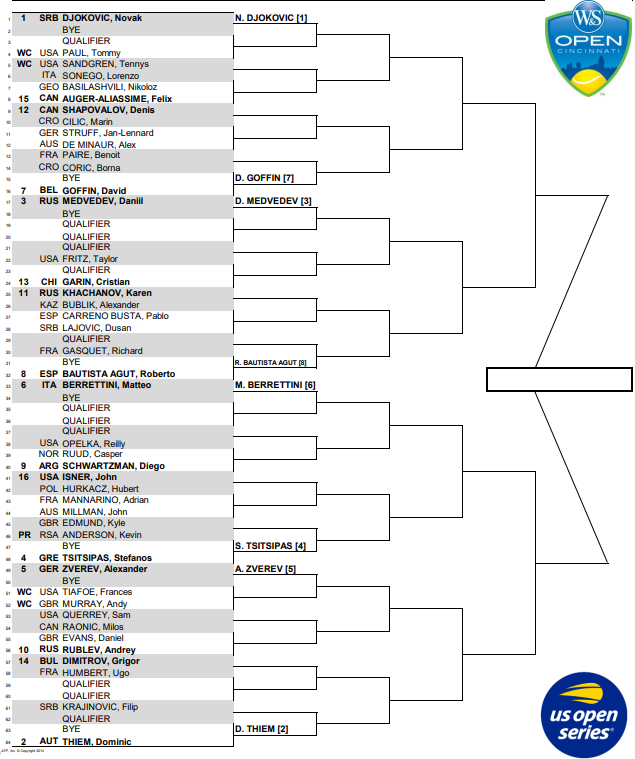