Due to the coronavirus, Rome is the second Masters 1000 event of the season instead of fourth or fifth, staged right after the US Open! Rome became a part of the Open era in 1969 and some of the greatest players of the Open era have won the title in the Italian capital.

Alongside Kitzbuhel and Hamburg, Romer serves as the biggest test for the players ahead of Roland Garros, the third and final Major of the harmed season, gathering the world's best players, excluding Roger Federer and the US Open finalists Alexander Zverev and Dominic Thiem.

For the first time, there will be no crowd at Foro Italico, with the organizers following health rules and taking care of everything to produce a safe tennis week. The last year's finalists and the world's leading players Novak Djokovic and Rafael Nadal are the favorites, hoping to set the sixth Rome title clash as the dominant players at this tournament in the previous 15 years.

The four-time winner Novak Djokovic returns to the court for the first time after that controversial US Open default, losing a chance to fight for the 18th Major crown and hoping for a better run in Rome. Novak will kick off the campaign against Salvatore Caruso or a qualifier, with the more challenging encounter waiting in round three against Kyle Edmund, Filip Krajinovic or Felix Auger-Aliassime.

Coric returns to Europe after a fantastic New York campaign, facing Cristian Garin in what should be one of the first round's best matches, together with Karen Khachanov and Casper Ruud.

The home favorite Fabio Fognini and Stefanos Tsitsipas are the top-seeded players in the third quarter, trying to fix their previous results and make a notable campaign.

Fognini won just three games in his first comeback match in Kitzbuhel while Tsitsipas wasted six match points versus Borna Coric at the US Open. Grigor Dimitrov, Denis Shapovalov, Kitzbuhel finalist Miomir Kecmanovic and the young gun Jannik Sinner are their most serious rivals en route to the semi-final.

The nine-time winner Rafael Nadal will compete for the first time since February, opening the campaign against the US Open semi-finalist Pablo Carreno Busta. Andrey Rublev, Dusan Lajovic, Milos Raonic and Diego Schwartzman are Nadal's biggest rivals en route to the semi-final, eager to topple a great Spaniard and dethrone him after two successful years in the eternal city. 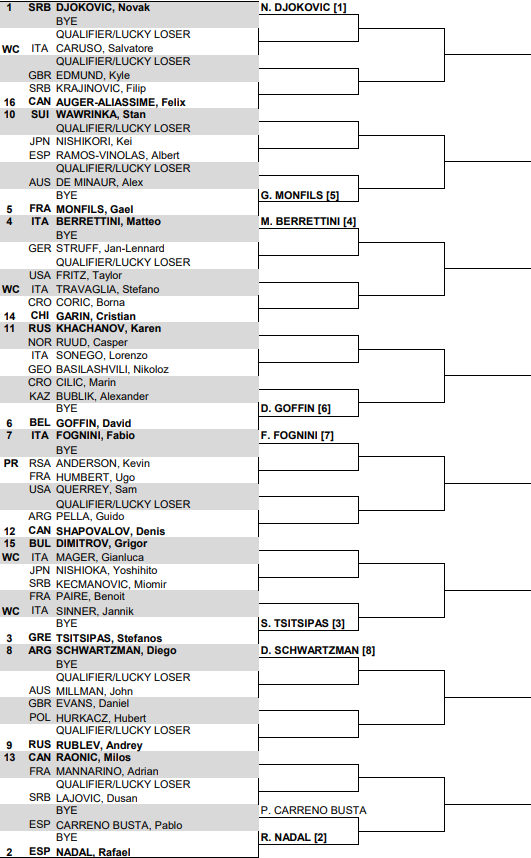