Dominic Thiem joined the special list a year ago and will try to defend the title this week, battling against world no. 1 Novak Djokovic and a crowded field that includes seven players from the top-15! Novak Djokovic asked for a wild card, competing in Vienna for the first time since 2007 when he won the title.

The Serb will try to add 500 points to his tally and secure the year-end no. 1 spot ahead of Rafael Nadal. Also, Novak is trying to cement his no. 1 status until March and pass Roger Federer's record of 310 weeks on the ATP throne.

Novak has won 37 out of 39 matches in 2020, competing for the first time since the Roland Garros final defeat and facing the fellow Serb Filip Krajinovic in the first round on Tuesday. If he beats Filip, Novak will face Borna Coric, who defeated Taylor Fritz in the first round.

Hubert Hurkacz, Attila Balazs, Dusan Lajovic and Lorenzo Sonego will try to stop Novak before the semis, which probably seems like the mission impossible. The 3rd seed Stefanos Tsitsipas leads the second quarter together with Denis Shapovalov, with two players from the top-12 hoping for a battle of the one-handed backhands in the quarter-final.

Karen Khachanov and Grigor Dimitrov will fight in the first round, with the winner of that one facing Tsitsipas or Struff in round two. After a couple of losses, Daniil Medvedev will try to regain composure and get back on the winning way, facing Jason Jung in the first match and Felix Auger-Aliassime or Vasek Pospisil in the second.

Novak Djokovic and Dominic Thiem are the top seeds in Vienna.

The defending champion and the 2nd seed Dominic Thiem enters the court for the first time since the quarter-final loss at Roland Garros to Diego Schwartzman, battling against Kei Nishikori in the first round.

Jannik Sinner, Stan Wawrinka and Andrey Rublev are also in the bottom quarter, with a wide-open battle en route to the semis. Andrey has won 34 matches so far in 2020, winning the title in Hamburg, reaching the quarter-final at Roland Garros and lifting the fourth ATP crown of the season in St.

Petersburg. Diego Schwartzman and Alex de Minaur decided to skip Vienna after competing in Cologne 2 and Antwerp finals yesterday, not risking anything and saving energy for the upcoming events. 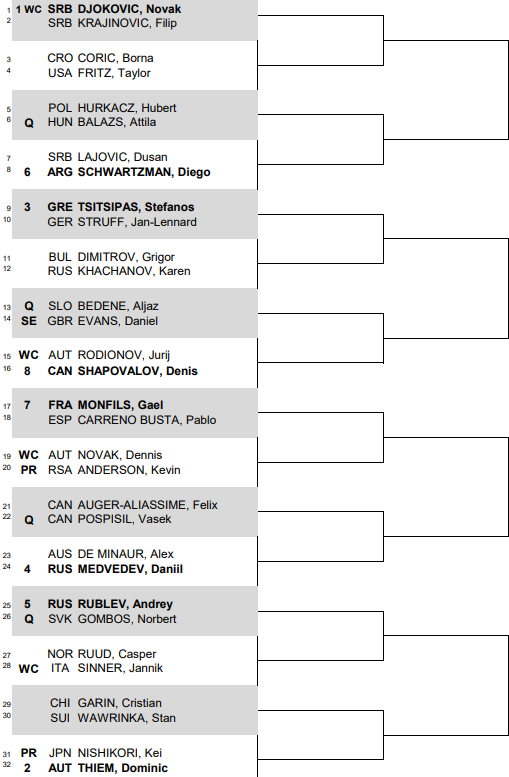 TODAY'S MOST POPULAR
RAFAEL NADAL
'Otherwise, Rafael Nadal would not have done it', says top analyst
Novak Djokovic reveals why he chose to play at Mallorca
Novak Djokovic: 'We played only once together but...'
ATP Mallorca: Novak Djokovic, Carlos Gomez-Herrera beat No. 3 seeds to reach final
'I’m uneasy about Roger Federer for the first time', says WTA legend
Novak Djokovic: I don't think we expected to reach Mallorca doubles final
Physio gives update on Dominic Thiem's injury
THIS WEEK MOST POPULAR
WTA TENNIS
Clijsters: "Serena and Venus Williams got a lot of sh*t for..."
'When Rafael Nadal sees that he has no choice but to retire...', says top coach
Kyrgios attacks: "How do you think Djokovic won the Roland Garros?
'Rafael Nadal's withdrawal from Wimbledon and Olympic Games is..' says Andy Murray
'Rafael Nadal has to take responsibility for this', says top coach
Casper Ruud: "Here's who I prefer between Roger Federer, Nadal and Djokovic"
Still-recovering Simona Halep out of Bad Homburg Open